I met Murder on the way

I have always enjoyed knowing something of the background to how films were made; in some cases these stories are better than the films themselves. I mentioned "Where Eagles Dare" a while ago, and while it's truly terrible, who could not be amused by the idea of Clint Eastwood having to be told that when dressed as a German officer he should refrain from twirling his Luger round on his trigger finger before replacing it in the holster? More recently featured here was the equally bad "Charge of the Light Brigade" where director Tony Richardson's antics included trying to have the Brigade of Guards dressed in blue for their assault at the Battle of the Alma because he thought it would improve the look of the thing. He also delayed and messed about so long on location that the Turkish army detachments intended to provide the extras had to go off on NATO manoeuvres, which explains why some of the climactic battle scenes look as if they had been shot using nothing but half a dozen stuntmen. 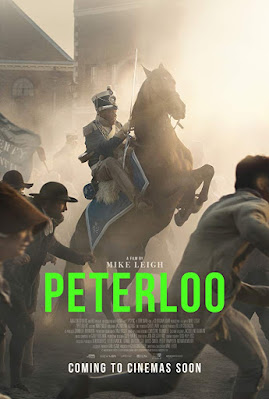 It was that last detail that occurred to me when I watched the opening sequence of the infinitely better film 'Peterloo'. It starts with a rendition of the Battle of Waterloo, the budget for which appears to have run to three men and a horse; and before anyone tells me that several horses gallop across screen from left to right, I would point out that they are all the same colour and you never see two of them together. All the money has clearly been spent on the massacre itself, which is very well done. My own experience of facing horses in that sort of situation is limited to a thankfully brief incident at the Battle of Bradford some forty years ago so I don't claim to be an expert, but it all looked very realistic to me. I especially liked the shots as the regular Hussars moved slowly in line abreast pushing back the crowd in a frightening and claustrophobic fashion. It's a very good film, telling an important story and featuring some excellent performances from such as the ubiquitous Rory Kinnear as 'Orator' Hunt. I am, naturally, writing this well after it has finished in cinemas, so it's not a very timely recommendation, but catch it whenever you eventually get a second chance. 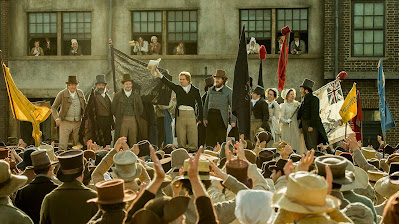 Despite the lush cinematography, it's not meant to be taken entirely literally - Mike Leigh is definitely being a bit Brechtian - and contains points that clearly aren't historically accurate, but help convey the lesson which he wants us to learn. So one of the characters has a strange attachment to his coat, but it means we remember how quickly he has moved in society's eyes from hero to villain. Similarly Hunt is shown simply speaking very loudly at the rally, which enables us to follow his argument for democracy and non-violence, but is a tad optimistic when faced with 60,000 people or more. What would have happened is that he would have paused after each sentence so that his words could have been repeated and passed back through the crowd. You know, as shown in that other excellent, non-naturalistic film with a message 'Life of Brian':

"Blessed are the cheesemakers"
"What's so special about cheesemakers?"
"Well obviously it's not meant to be taken literally; it refers to any manufacturers of dairy products."