I have been to the National Army Museum to see their current exhibition of Great War paintings by Sir Alfred Munnings, many of which have been brought together for the first time in a century. Munnings specialised in painting horses, although the notes to the exhibition claim that he actually preferred cattle as models because of their docility. I know very little about painting and even less about horses, but what I do feel qualified to say is that the animals in the pictures look to me like they do in real life, which one cannot always say about some well-known equine artists. 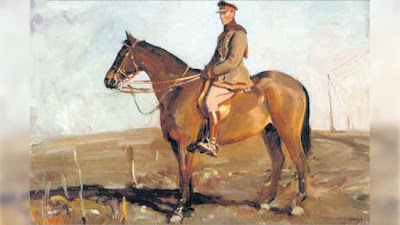 Munnings was commissioned in 1918 by the future Lord Beaverbrook to document the Canadian Cavalry Brigade in France, whose commander General Seely is shown above on his horse Warrior. Munnings - a notorious womaniser whose first wife tried to commit suicide on their honeymoon - only had one eye, which seems to me to make his work even more impressive. Being cavalry they were well behind the front and most of the paintings show formations en route or the horses being cared for. 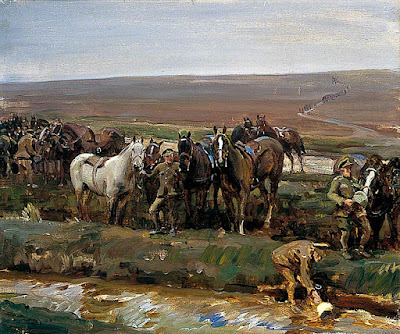 However, while he was there the front moved due to the German Kaiserschlacht offensive and whilst that did give Munnings the opportunity to paint perhaps his most famous work, 'The Charge of Flowerdew's Squadron', he wasn't an eyewitness and it probably didn't take place as it does in the picture. 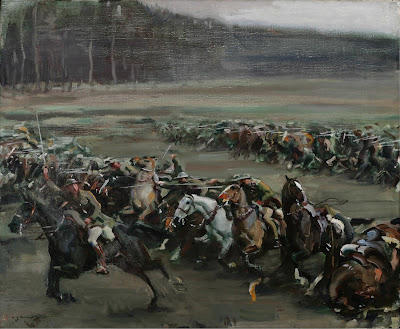 In fact he had been moved to the safer task of painting the Canadian Forestry Corps, a formation that I had previously been unaware of. It would seem that it was exactly what it sounds like: a large number of lumberjacks brought across the Atlantic to cut down trees, eat their lunch and go to the lavatory. It's one of those unsung areas that probably nevertheless had a large impact. Between 1914 and 1918 British imports of lumber fell by 10 million tons per year freeing up capacity in merchant shipping already under fierce attack by submarines. 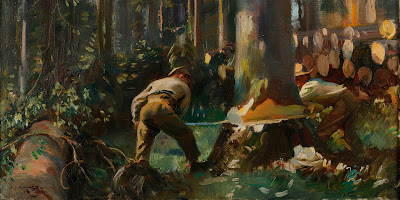 The permanent collection at the museum contains many interesting items, among them for example the hat that Picton wore during the Battle of Waterloo. Or should I say during part of the battle, because also on display is the musket ball that killed him. Highly recommended should you find yourself at a loose end on the Kings Road. Any museum trip worth its salt will always generate a useless fact. That from this one is that the modern Hungarian army has no Hussar regiments.
Posted by Epictetus at 17:48