The Art of Coarse Figure Painting

I quite regularly go to watch amateur theatre companies. Some of the productions are very good indeed - Alan Bennett's 'The History Boys' at Ilkley Playhouse springs to mind - but it's fair to say that many of them don't quite reach those heights. In 1964 Michael Green wrote the very funny 'The Art of Coarse Acting' about amateur dramatics and those who participate in them. He defined a coarse actor as, among other things, someone who can remember the pauses, but not the lines and whose hope is for his character to be dead by Act II so that he can spend the rest of his time in the pub.

A short while back Iain foolishly asked to see the painted version of my scratch built WWI German 17cm Minenwerfer. And more or less simultaneously Prufrock wrote about common tropes of wargames bloggers. Now I happily put my hand up to most of those he featured, but not as it happens to the one about promising to paint any better in the coming year. I know that I am not a terribly good painter, but I also know that actually my standard of painting is perfectly adequate for what I do with it. So, responding to both Iain and Aaron (beware a man with two, or even three, consecutive vowels in his name - that's my advice), and with due apologies to the late Mr Green, here is an illustrated guide to the art of coarse figure painting, complete with no jokes whatsoever.

My first point is a boring, but necessary one; decent brushes are just as essential to coarse painting as they are to professional standard. I'm sorry, but there it is. I decided to treat myself to some new ones for the New Year and hastened to the establishment of a local artist's supplies entrepreneur (and wargamer). With hindsight the trip was overdue, not so much because the quality of work produced has improved dramatically, but because the pleasure of painting has increased with better tools in my hand. 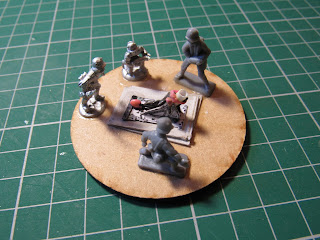 So, it turns out that I did have plenty of German artillery figures after all and didn't really need to order any. Now I have more. The plastic ones are Hat and the metal ones are Frontline; and they are stuck down with PVC glue. I appreciate that they would be closer to the weapon in action, but that would leave the base looking a bit empty, and they are easier to paint this way. Couldn't I put them on smaller bases? If I'd have thought about things like this before I came up with my basing standards, then yes. Couldn't I paint the figures separately and then base them? I will simply point out that that would involve more work. 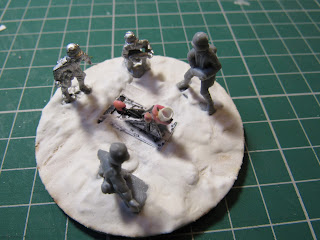 Next step is to cover the base with filler, this being where the basing of the weapon on a couple of layers of cardboard comes in to its own. I have abandoned my experiment with lightweight filler, which I found wouldn't stay where I put it, and gone back to the original. 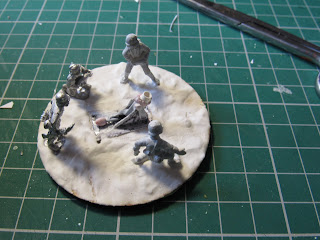 The same dogmatic chap who used to lecture me about banana oil also had a bee in his bonnet about Rustoleum, which he had read on the internet was the only product to use to prime plastic figures. I told him repeatedly that was simply the US brand name of stuff readily available in the UK, but he wouldn't have it and at one point was trying to source some imported cans. He has long since moved on to collecting the shapeless metal figures of his childhood, and I have no idea whether he ever got any. For the record I use Halfords own label, which works fine. For this quantity of figures I don't spray it directly on, I spray some into a pot and brush it on. Choose your vessel carefully. The primer melts the type of plastic used for disposable food bowls; don't bother asking how I know. 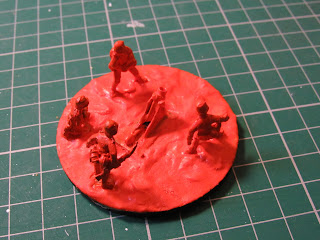 I believe that there is a hotly contested debate about the various advantages of undercoating in either black or white, which is why I have always used terracotta. The two strong points for me are firstly that I can see the surface detail to paint the next coat, and secondly that if you miss a bit and the undercoat shows through, then terracotta is very bland and not easily noticed. You may be thinking that the lighting for the photograph is making the terracotta look a bit garish and, well, orange. In fact it is orange. I ran out of terracotta and all I could find quickly was some cheap tubes of artist's acrylic orange in Captain Value. I'm going to put a wash on when I've finished and a matt varnish; it will be all right on the night. 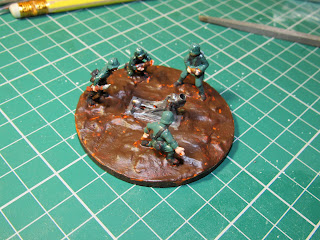 I seem to have forgotten to photograph a few steps. Anyway, I use a method which I have seen described as 'imagining that the little chap is getting dressed'. I paint the flesh first, then the main uniform colour, then the various accoutrements. Apart from Valejo German Uniform, everything is craft acrylics, with no shading, highlighting or any of that arty-farty carrying on. 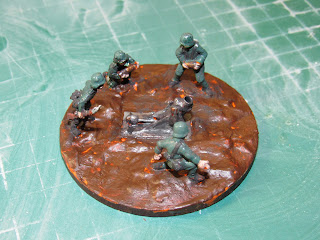 I then apply a diluted Humbrol enamel wash, black in this case for Germans. The level of dilution is a good question. On this occasion I thought it was much too dark, wiped it off, diluted it some more and reapplied. I appreciate that isn't very scientific, but there you go. As a digression you may notice that the surface of the cutting mat has undergone a bit of damage between the last two photos, following one of those domestic inadvertancies which seem to occur a lot in Casa Epictetus, especially when modelling is going on. This blog doesn't have the budget for competition prizes, but if any wants to take part just for the fun of it, there is huge kudos to the first person to leave a comment correctly identifying what I did. 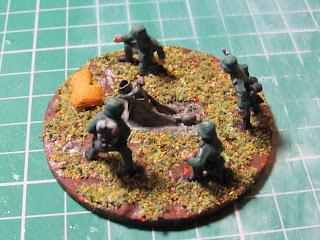 And here's the finished article, varnished and flocked, with a couple of random sandbags for visual effect. To end where we started, I know it isn't very good, but it is quick and easy to do and entirely fit for the purpose intended. I shall not be attempting to improve.