Lloyd George, your boys took one hell of a beating

The first game of the year in the annexe was our first try at Peter Pig's 'Square Bashing', and I'd count it as a success; as opposed to the British attack which was not, in any sense, a success. As usual with a first try of new rules there were important lessons to be learned as to what tactics to employ, for example not to call in artillery barrages too close to one's own troops. 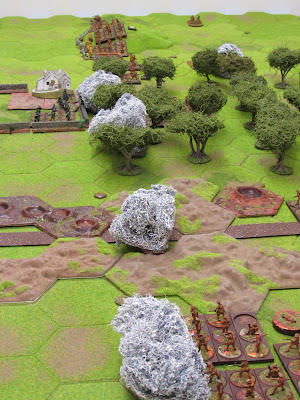 I had read beforehand some of the reviews posted on TMP at the time that the second edition of SB was released a few years ago. There was much chuntering about the turn sequence being unclear and, in particular, how difficult it was to understand the difference between hits (for the purpose of permanent damage recording) and casualties (for the purpose of morale testing). All I can say is that we didn't have any problem at all, and for a debut run through I thought we got very few rules wrong. One other complaint people had was it all took too long, whereas we didn't find that, and it would seem to meet my requirement for a game that one can play in an evening. 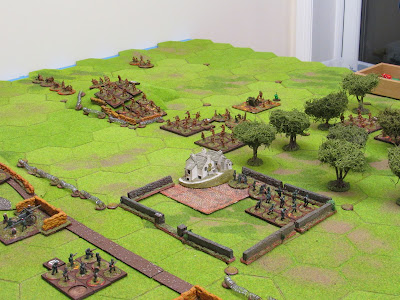 That may still exclude the set up process - which in typical Peter Pig fashion seems to be very complicated and take for ever - but would certainly include calculating the result. I deferred that to a subsequent day on the basis it would be long-winded, but in fact it looks more complex than it is and I did it in five minutes. One thing I wasn't especially keen on is the fact that the value of objectives and units killed relies on the roll of dice after the game ends, but I think it would have made little difference to the outcome on this occasion. What might have made a difference is if I had told James in his role as attacker that he could get victory points for occupying squares in the defender's second and third rows as well as for capturing the objectives. In my defence I can't remember reading that bit before at all. Anyway, at the point we finished the Germans had 82 VP to the British 30. Had the British captured the farm it might have reduced that difference by about 25 even if casualties on both sides had been equal while they did it. 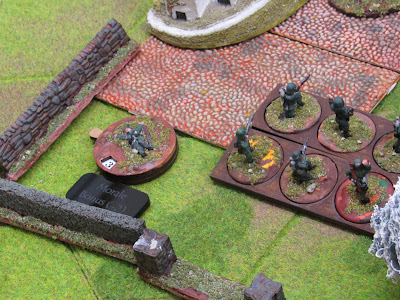 I mentioned in my report of last week's refight of Novara that Peter had started the New Year in his usual dice rolling form. It certainly wasn't true for this game; he was on fire, saving everything and hitting everything. It won't last.
Posted by Epictetus at 11:39