No posts for a few days because I lent my laptop to the elder Miss Epictetus for some urgent midwifery business. I did consider dusting down the old one, but, as you may remember, the keyboard on that one is incapable of typing the letter 's'; to do o would obviouly be a wate of time. In other news I have had my revenge on the exercise bike for straining my groin by breaking it and have had to spend a lot of money to replace it; that will show it who's boss. 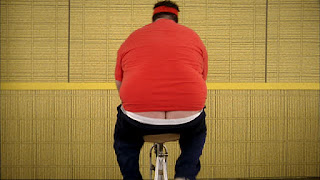 The Square Bashing game a couple of weeks ago having been declared sufficiently successful to warrant another go I have been working away on a couple of things. The two Mark IVs are more or less complete. Naturally after boasting as to how easy the first one was to assemble I found the second one - which is of course essentially identical - more of a challenge. The specific period of my forces is the final year of the war, Cambrai onward, and so I have painted them with the red and white identification stripes adopted by the British in 1918 once the Germans started using captured tanks in numbers. One source - OK, it's the Osprey - says that the location and size of the stripes varied so, notwithstanding every photo I've ever seen showing them looking identical, I have made them slightly larger for artistic effect. I have also omitted the rails for the unditching beam as those provided in the kit are so fragile that they would just break off anyway. I have an idea as to what to use instead and if it doesn't prove to be beyond my modelling skills I shall retrofit them at some point. 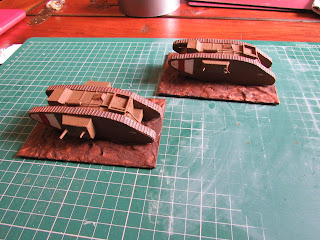 The limited nature of my kit assembling abilities brings me to the aircraft that I bought. I certainly shan't be able to complain that I haven't had my money's worth in hobby time from them because I have been fiddling with the Sopwith Camel for hours. I felt quite pleased with myself when I dry assembled it eventually, only to discover that I had the top wing on back to front. Anyway, it is now complete and undercoated, so we shall see what it looks like after painting. I have left the propeller off for the same reason as mentioned before: it would just break off anyway. The reasons I went for 1/144 were size and megalomania. The first doesn't really make any sense because WWI aircraft are tiny anyway. The second, which basically means buying squadrons of the things and playing air combat games, is fairly unlikely if each one takes that long to build.

After only playing one game of Square Bashing so far it is obviously too soon to start making house rules. However the aircraft rules as written are somewhat ambiguous, so a rewrite for clarification purposes is required. I also want to tweak the Higher Command rules a bit, possibly just temporarily while we work out what they all mean. In order to keep everything else as standard as possible I am going to add back in poison gas barrages, which I left out of the asset options I gave to the players for the last game. I have therefore knocked together some markers, with the added bonus that it gave me a chance to use the hot glue gun; something that always goes down well. 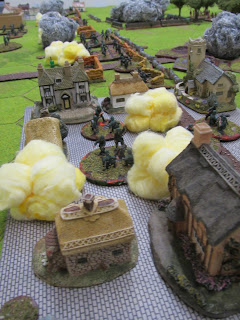 Next step is all the pre-battle dice rolling, which I might get Peter and James to do if there's an early finish to the next game in the legendary wargames room. If the British are the attackers they can have the tanks, if it's the Germans they can have stormtroopers and flamethrowers.