I have been reading 'Medieval Military Combat' written by Tom Lewis and recently published by Casemate. In case you don't want to read any further, I'm going to give it 3 stars: not bad, worth a read, borrow rather than buy if you can. 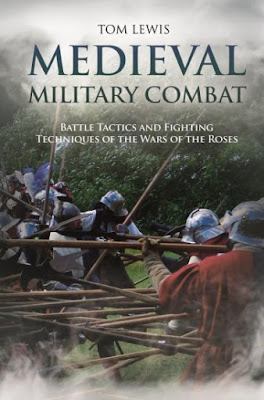 The recently published military history that I have read all seems to have been lacking a proof reader. By way of a change, Dr Lewis could have done with an editor; someone to mould his arguments into a better structure and chop out all the repetition. He also needed someone to point out the weakness in claiming to be setting right widely held misconceptions about a quite niche subject, namely that a lot of those interested and motivated enough to read the book won't actually have those misconceptions in the first place. So, he comes to the conclusion that there weren't as many combatants or casualties at Towton as the chroniclers of the time said. Indeed. And he reveals that a fully harnessed man at arms could probably only have fought for about ten or fifteen minutes at a time because it was such hard work. Quite so.

Anyway, that aside, he is quite clear on the direction from which he approaches things. Although an  academic he is not a historian, but rather had a career in the Australian armed forces (he finds room to tell us on several occasions that he served in Iraq), has lots of experience of relevant(ish) fighting techniques such as fencing and riding, and has observed and interviewed re-enactors at length on the physical aspects of what they do. He has mashed all this together, read the secondary sources extensively - the bibliography is good - and with an added dash of Inherent Military Probability has laid down how he thinks it worked. It might be right, it might not, but it makes one think.

Despite the title, and subtitle come to that, this is mainly a book about the man at arms wearing plate armour and fighting on foot, and is none the worse for that. He believes it likely that they would have operated in a less formal version of the triplex acies used by the Romans during the Punic Wars, relieving each other in the front line turn and turn about, thus allowing them to fight for longer periods. It's certainly plausible, but he doesn't have anything specific to support it beyond the fact that it seems logical to him and, as he points out, the commanders would all have studied Vegetius.

As I said at the top, it's worth a read.

Email ThisBlogThis!Share to TwitterShare to FacebookShare to Pinterest
Labels: books, Punic Wars, Wars of the Roses