Not only have postings been sparse recently, but they have all been about wargaming; and how dull is that? Cultural opportunities at this time of year are always a bit thin on the ground, and this is not, needless to say, the best of times. I have however been to a couple of pieces of musical theatre. 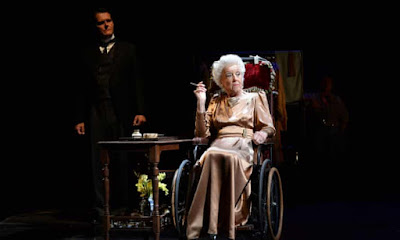 Or have I? Not long ago I saw a conversation with Stephen Sondheim's biographer in which he said that the composer's view was that if productions were put on by an opera company then his output were operas, but if they were done on Broadway or the West End then they were musical theatre. 'A Little Night Music' was put on by Opera North so, ergo, it's an opera. Either way both I and my companion for the the afternoon thoroughly enjoyed it. I wouldn't be the first reviewer to point out the irony of songs - 'Send in the Clowns' being probably the best known example - which had been specifically written for actors who couldn't sing a note, being sung beautifully by opera singers who could probably have done them without drawing breathe if they had felt like it. The one in the photo above is the illustrious Dame Josephine Barstow. 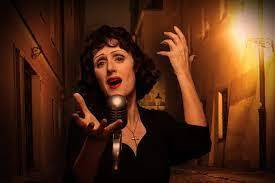 Equally tuneful were the cast of 'Piaf', an excellent play with songs about the Little Sparrow from Belleville, and that's despite the fact that one of the actors has represented the UK twice in the Eurovision Song Contest. Rather effectively Edith (*) and her associate Toin were portrayed as Cockneys rather than having cod French accents of the 'Allo 'Allo variety. The rest of the actors spoke in what I assume were their natural accents (apart from briefly when the Bosche occupied Paris) and that also mostly worked. The exception was when Charles Aznavour was revealed as being Welsh. Even worse he was facially the spitting image of the chap who used to advertise Curly Wurly.

For the record, Aznavour in real life actually looked a bit like Roberto Mancini. And as even more of a digression, Terry Scott of course played Cardinal Wolsey in the previously-covered-in-this-blog 'Carry on Henry'. Back to la Piaf: she lived a life, as they say, but she regretted nothing. Rien de rien.