It's time for another book review, and this time we have left the 15th century behind. Which is kind of apt because, if Dr van Creveld is to be believed, leaving things behind has been the defining feature of armies on the march from the Thirty Years War onwards. 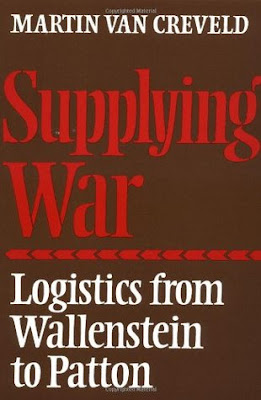 The author makes the seemingly inevitable claim that he is going to debunk long established myths. I came to this knowing nothing in particular about military logistics and so can't really comment on whether he does so (*). He also claims that he will be carrying out thorough analyses from a new perspective. These mainly seem to consist of the sort of arithmetic problem that Mr Wilkins used to set us in the first year at Boreham Wood Grammar School: if one man with one lorry can move 10 tons for 100 miles in a day, then how far can 5 men with 2 lorries move 15 tons in a week? So not that new a perspective then. In fact it reminds me of the course I got sent on at a time that I was building airports for a living. It was run by a chap from NASA and was billed as 'Advanced Estimating Techniques'. These basically consisted of forecasting how many man hours something would take, how much each hour would cost and then multiplying the two together. Still, they put a man on the moon, so who am I to quibble?

I assume that Dr van Creveld is American; the book is in American English anyway. Presumably therefore Patton's name is included in the subtitle to attract US readers. In fact George doesn't feature very much at all, the focus in the section on North Western Europe in 1944 is mainly on Montgomery. The American Civil War isn't covered either. Those that are featured include Marlborough, Napoleon, both the von Moltkes and Rommel, the last of whom doesn't come out of it well.

I found it interesting - admittedly from a low knowledge base - and took one point away in particular. The author asserts that in the Horse and Musket era (which for this purpose includes the Franco-Prussian War) the percentage by weight of an army's supply requirements represented by ammunition and powder was circa 1%, hugely overshadowed by food and, especially, fodder. Given the size of the forces involved they could easily live off the land, as long as they kept moving. It was when they stopped - e.g. to undertake a siege - that they had a problem. In the Vauban's Wars set of rules which I have been playing recently the besieger is constrained by his powder supply , but not by food/fodder. Perhaps it should be the other way round.

Having mentioned the FPW, can I draw your attention to a week by week history of the conflict being run on the realtimehistory (all one word) YouTube channel to commemorate the, er, 151st anniversary; as you do. Probably not for those who are experts, but informative for anyone who doesn't already know the difference between a Dreyse and a Chassepot.

* It's worth mentioning that the book was first published in 1977, so they may well be yesterday's myths anyway.