The book which I reviewed yesterday outlines several ways in which those who broke the laws of war might be punished. Some of these aimed to humiliate those who had brought disgrace to chivalry: they might be stripped of their spurs, their shield could be hung upside down or they could be paraded through the streets on horseback while facing the horses tail. Now I know that a lot of regular readers have an encyclopaedic knowledge of this blog, so no doubt there are many of you out there saying to yourselves: "Hang a trout, what about that thing you posted on 25th March 2014 about Sir Giles Mompesson? Are you now telling us that never happened?". Well, indeed I am. 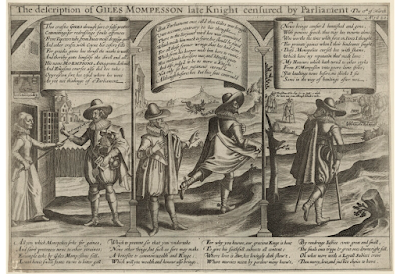 Personally I put the blame squarely on those dilettante, liberal, London-based journalists at the Guardian, who one must assume saw the words 'facing the horse's tail' and let their fevered imaginations do the rest. Having now done my own fact-checking I can confirm that Mompesson was almost certainly merely riding backwards. It is hard to be entirely sure though; according to the Dictionary of National Biography the corrupt MP was sentenced both to life imprisonment and to permanent exile, which seems an unlikely combination. He clearly never served either punishment anyway.

In any event that posting from all those years ago isn't a complete write off. I still think a picture of a dog that looks like Hitler has comic validity.