The Laws of War in the Late Middle Ages

Fate decreed that there would not after all be a game last week. But the upside is that I am free to bring you another review of a book which you will never read. Today we feature 'The Laws of War in the Middle Ages' by Maurice Keen, first published in 1965. 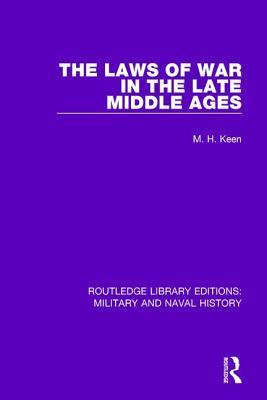 The first thing to point out is that this is a rigorously academic book, whose footnotes are both copious and also often in either Latin or medieval French. I've pulled that trick myself on this blog from time to time, but it must be noted that while it's funny when I do it, it isn't funny at all when others do. Notwithstanding that, it's a very interesting read. Keen describes a world (OK, half a continent - this is entirely about Western Europe) in which there can be overarching 'laws' without any supranational organisation to draw them up, let alone police and enforce them; indeed for much of the time there aren't any nations either in the sense that we would understand them. The context is that all the relevant people (i.e. the warrior caste) consider themselves bound by the rules of chivalry, and it is their sense of honour alone that ensures that fair play is observed even if it is only amongst themselves for some of the time. Because Keen also demonstrates fairly effectively that everyone else - with the possible exception of the church - are protected by no laws at all, and that even those supposedly bound by their code quite often ignore it when it suits them.

I don't think there is much direct read across to the wargaming table, although chapter VIII on sieges is required reading for anyone interested in that aspect of medieval warfare. There is a quite a lot on the role of heralds, and it filled in some of the gaps that I felt were missing from the book I recently read on that subject. There was also an unexpected overlap with another book I have been reading: 'Debt: The First 5000 Years' by anthropologist David Graeber. One small part of that book considers the differences and similarities between 'a debt of honour' and 'honouring a debt', a nuance which turns out to be very pertinent to the medieval practice of ransoming noble prisoners captured in battle.