I had intended to post yesterday about the conclusion to last week's game, to clear the decks ready for this week's return to siege works in the annexe. However, in the circumstances I inevitably spent the day in a self-indulgent Rolling Stones marathon. I'm a big fan, originally I think because the elder brother of the chap who lived next door to one of my best friends at school had all the early albums; and if that's not a good enough reason then I don't know what is. The death of an eighty year old shouldn't come as a shock, but it did because they had always been there and I implicitly assumed that they always would be. RIP Charlie.

In any event, there wasn't much to write about the game because it swiftly ended in defeat when the British Light Division ran away. I had posed the question as to what to do with one unit which was toe to toe with the French, but it was moot because they were destroyed before I had a chance to do anything. I remain a bit sceptical about the rules as they stand, but - and I urge you to suspend disbelief - it is quite possible that I'm wrong. We need to play them some more. 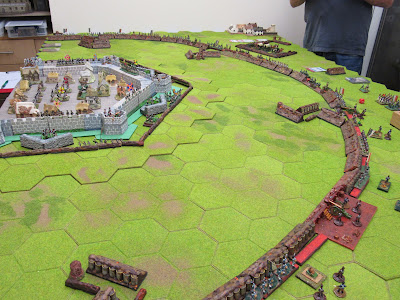 Rules that do seem to (mostly) work are 'Vauban's Wars', which we have now had a chance to try properly. I had set up the game a couple of months ago now, but never played it solo it because it was too hot, then it wasn't hot enough, then it rained, and then I couldn't be arsed. But last night we assembled Peter as the garrison, the Chuckle Brothers as the besiegers, and me in charge of frantically flicking through the rulebook. It all went fairly well and is, as I had thought it might be, a different and better game when not played solo. 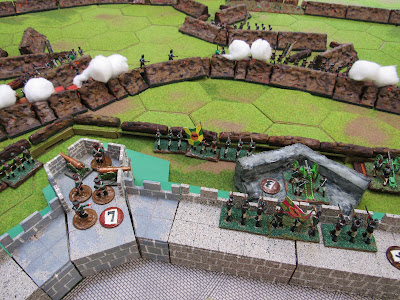 The besiegers have thrown up some gun emplacements close enough from which to attack the ravelin in the photo. The first siege guns moved forwards were driven back by counterbattery fire, but were quickly replaced. The numbers are the strengths of the defences, which were established by astute use of the French master spy, who has so far been successful in every mission on which he - or perhaps she - has been sent. The ravelin had an initial strength of 5, but the guns have quickly reduced that. In fact, the attack dice rolled higher than the defence dice throughout the evening, on both sides. The game will hopefully be completed next week.