It was very nice to congregate chez James once again, and celebrate our host's restoration to health by throwing some ones and drawing some low dominos from the bag. I trust that you have all managed to read the scenario details on James' blog. If not then I have stolen one of his photos, showing what the table looks like. I don't normally take any photographs whilst in the legendary wargames room, but now wish that I had taken one of the new covers for the quick play sheets. They are repurposed menu covers, and both look and work very well indeed. 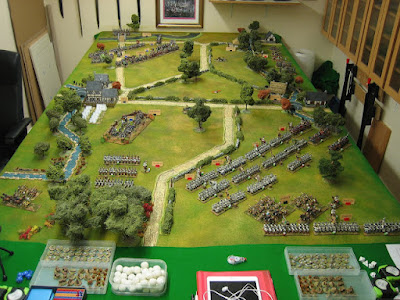 Having been given the opportunity to play with James' wonderful toys in a scenario he had clearly spent time devising and setting up, it seems churlish to complain. However, it behoves me to point out - to myself if no one else - that James' rules really aren't suitable for this battle; or perhaps visa versa. The rules are a derivation of Classic Piquet, a set which I very much enjoy. For those unfamiliar with them, players get initiative, which they use to both turn cards which show what actions they can take and also to take those actions by command or unit as appropriate. It's a bit more nuanced than that, but that's the essence. The short term fluctuations in initiative for each side plus the arbitrary order in which the cards are turned, plus the normal use of dice for combat resolution, provide a friction which I know isn't to everyone's taste, but which I like.

However, at Moys the Austrians had twice as many troops as the Prussians. This inevitably means that, given initiative being roughly equal across the whole game, the Austrians will spend twice as much on actions for commands/units; the corollary is that they must therefore turn fewer cards. This is important because when one side has turned all their cards the turn is over and the decks are reshuffled. In a scenario with such disparity of forces this will always be the smaller force. We therefore end up with the counterintuitive, and I would suggest undesirable, outcome of the defenders being far more flexible and agile than the attackers. I think this is such an intrinsic feature of Classic Piquet that no tweaks could compensate for it in this type of scenario. I stress the Classic bit because FoB, the other main game in the Piquet stable, works in a different way and would be perfectly suitable.