Early last year I mentioned a book  called 'Armies of the Mexican Revolution' by Mike Blake and promised to return with a review. I'm pretty sure that I never got round to it, so let's start today's post by saying that it's excellent. In fact I would go so far as to say that for anyone planning to game the conflict - which obviously doesn't include me - it's indispensable. Partizan Press have followed this up with two further volumes. The first, by Mike Blake and Chris Swan, is the following: 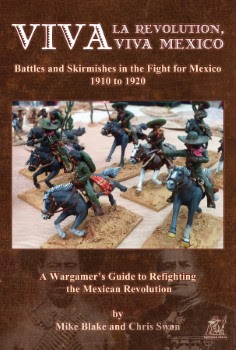 I'm really not sure why the title isn't completely in Spanish, i.e. Viva la Revolución, but in any event, the subtitles sum up the contents better. It's basically a scenario book with a chapter on what rule amendments would need to be made in order to use Black Powder. The scenarios are both historical and imaginary and are easily usable with other rule sets. It's once again an excellent book and worth reading. 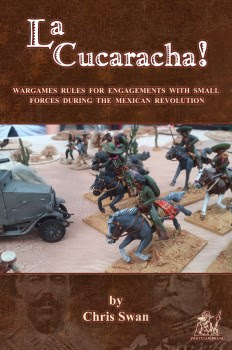 The other book, this time by Chris Swan alone, is 'La Cucaracha!', which contains both rules and scenarios for, in the author's words, engagements with small forces. That seems to mean both low numbers of units plus the implication that those units are small enough that key individuals (leaders/specialists/mercenarios etc) would be worth representing both physically on the table and in game terms; a point of reference might be Too Fat Lardies type games. I think that this is my favourite of the three books. In fact I like the look of the rules to the extent that were I intending to start this as a project (*) then I'd give them a go. Including various optional sections they seem to cover pretty much everything from snakes to aircraft.

Having said that, I'd recommend all three books. The main negative is that none has an index, although 'Armies' has a good bibliography. I got them all from Caliver Books.