The Moys Are Back In Town

James set it all up again and we had at it for a second time, ending the evening after turn four of the eight which the Austrians have to capture all three objectives. James took some photos of the action and may post them on his blog. I didn't, but did remember to take one of the menu style Quick Play Sheets, which I rather like. What he needs now is a blackboard on which he can write the special rules of the day. 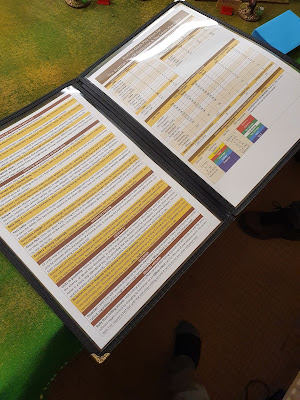 I've always bigged up Piquet for its ability to generate radically different games from the same starting position. However, I think any set of of rules would have done the same here. The scenario starts with three Austrian grenadier units about to storm the redoubt. In the first game some extreme dice results at that point saw that command blown away. Not only was that not replicated, but the Prussians spent all night unable to hit a cow's arse with a banjo. By the evening's end they had destroyed a magnificent total of no Austrian units at all and had lost control of the first two objectives. I think next week may be different though. Not just because I am expecting a reversion to the mean in terms of combat dice rolls, but also because my hypothesis about initiative is just about to be proven. We - i.e. the Austrians - are never going to get to turn enough cards to get all our forces up the hill and drive the Prussians off. We shall have to rely on the Major Morale rules to win. I would explain what that means, but I don't really understand it. It's something along the lines of the Prussians having to multiply their number of destroyed or routing units by the value of π and then roll dice and pay morale chips until James declares the game over. A full explanation will follow should we get that far.

Here's a music video, but not the one you were expecting: