I have mentioned before that I own a number of solo board games, and also that I virtually never play them; they didn't even get brought out very often during lockdown. Of course that is more to do with me than with any problems with the games themselves, which are mostly clever and challenging designs. That is certainly true of what I think is my favourite among them: Maquis. It's a game that thematically appeals to me as well, as one takes the part of the French Resistance and tries to complete various missions of sabotage, spying, infiltration, propaganda and the like without being caught by the collaborators of the Milice or by the occupying German forces. A second edition has just been published containing additional missions and associated playing pieces. The additional material was also made available as an expansion to those owning the first edition. 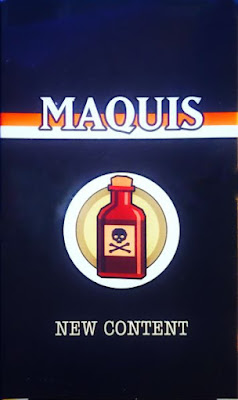 Obviously I don't need to explain to fellow wargamers why I would buy extra bits for something that never hits the table in the first place, and so I inevitably sent off for a copy. The missions in the original had their difficulty coded at one star (easier) or two stars (harder), whereas the new missions are given a rating of three stars. I never found any of the first lot of missions - you have to complete two within the allotted number of moves in order to win - to be easy, and these new ones are as difficult as you'd expect. I have so far failed badly to 'Destroy the AA Guns', the main problem as I see it being that the surest route to get weapons is via an air drop, you can't have an air drop if AA guns are present and you need weapons to get rid of the AA guns. In fairness, the resources available have improved including the availability of forged documents so one can bluff one's way past patrols instead of shooting it out with them. There's also now a 'Fixer' character, who can provide whatever you want, for a fee of course.

So, still highly recommended as long as you overlook the fact that I don't actually play it much myself. Having said that, I shall certainly be giving all of the new missions a go before I put it back in the cupboard. Next up is 'Free the Resistance Leader': 'A resistance leader has been captured and will be transported away from town soon. Free him from the occupiers...or make sure he at least can't tell them his secrets'.