And so to the opera. I confess that I wasn't at all familiar with the work of Gian Carlo Menotti, who, despite having been at one point the most performed of 20th century opera composers, hasn't been in fashion recently. However, I have now seen two of his works within a week, performed by different companies. He is obviously having a moment back in the limelight. 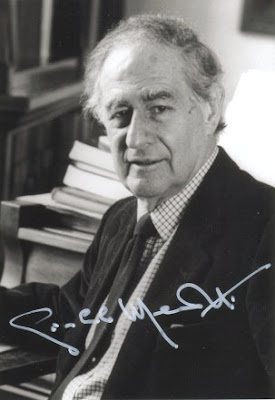 The Rough Guide to Opera uses the term 'overcharged emotion' to describe 'The Medium' and I think that's fair enough. Indeed, I might go so far as to say it was melodramatic. A similar question is posed as in 'The Turn of the Screw': are the ghosts real or the product of overheated imaginations? The usual operatic spoiler alert applies - someone dies in the end - and for some reason the director chose to make that a different person than the one indicated by the composer. I overheard someone speculate that we were thereby to assume that the other character had died offstage at some point and become a ghost himself, but your guess is as good as mine. Obscurum per obscurius.

The travails of the composer when faced with theatrical reality and the egos of producers, directors, performers and, above all, funders is the theme of Richard Strauss' 'Ariadne auf Naxos', which I've also seen; or to be precise I saw the Prologue, the first part of the opera, which deals with the backstage shenanigans before the opera - i.e. the opera within the opera - is performed. Think, 'Kiss Me, Kate' or the Mechanicals from 'A Midsummer Night's Dream'.  It was very well done. I felt that the soprano playing the character of Prima Donna - i.e. the soprano playing the soprano who would have played Ariadne had we got that far - had based her performance on Miss Piggy. My companion for the afternoon demurred on the grounds that she - the soprano - was too young to have heard of the Muppets. Tempus fugit.

The other Menotti piece was 'Amahl and the Night Visitors'. This was a seasonal production as the visitors in question were the Three Kings, bearing the usual gifts plus, a new one on me, a parrot. It was quite charming, although in a world where directors feel free to alter things as they see fit, I might have changed the lyric "Little child, may I touch you?". Tempora mutantur.