The rules may work, but the link between my camera and my laptop still doesn't. (As an aside, having failed with everything else I have now ordered a new cable. If that does the trick then apologies to Microsoft will appear here in due course.) In the meantime readers are denied the full range of artistic shots that I took and are instead limited to a quick snap on the phone. 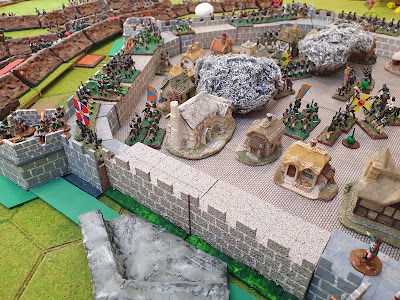 The game was closely poised when time ran out. I said that I would finish it solo and, who knows, maybe I will. One thing I rather like about the rules is the sheer variety of things that can happen, and we had a couple of occurrences that we hadn't encountered before. There was an uprising of sorts by the civilians within the town, which didn't amount to much, and then news came that a relieving army was on the way, albeit it turned out to be coming as slowly as it possibly could.

So, by and large I am happy with the rules, but I think they need to be tweaked to achieve a couple of things: increase the besieger's chances of winning somewhat and make sure a game will finish in two evenings. The main routes to do that are likely to be to start the game with some of the second parallel already built, for it be be possible for siege guns to be placed closer together (either two guns in an emplacement or just making the emplacements smaller), and perhaps reducing the strengths of the walls. The rules as published are necessarily agnostic about scenery definitions, so I think I also need to clarify further what can and can't be done with the pieces I actually have; e.g. how many units can be one one stretch of fortress wall. And I think some escalade rules would keep the defenders on their toes.

In an event, it will be a while before we have another go. I'm going to clear the table - either before or after I finish off the game - and try something else. In the short term Mark has promised/threatened to bring round his classic 20mm Napoleonics (which can be seen here) for some Old School, er, goodness.