We had a pre-Christmas game of X-Wing last night. I've played it a few times before and always enjoyed it. The rules run smoothly and give a game that's light, fun, quick-moving and - to me at least - completely abstract. I have never seen any of the Star Wars films and therefore know nothing of the setting. That only affects the game very slightly, in that it makes a little harder to keep track of pilots' special abilities etc. But if one just goes with the flow, it passes the time quite pleasantly. Interestingly Mark was playing the game for the first time and also turned out to have no interest in fantasy space worlds, but he seemed to enjoy things as well. 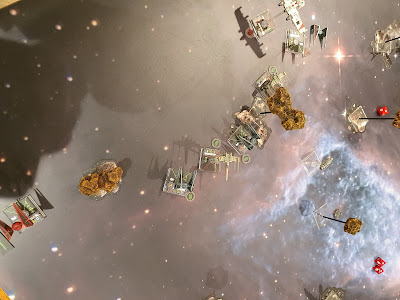 James had written the scenario, which came with a sort of fan-fiction style backstory involving a kidnapped Moff. I shan't pass comment on his prose style - which will in any case be familiar to anyone who's ever read one of his Chronicles of Kermit the Hermit - except to point out that he missed a great opportunity offered by the action described therein to make a joke about Moff balls. It became clear that half the players on the night hadn't grasped the exact significance of the presence of His Moffness aboard the escape pod, so James explained it to us, at somewhat more length than it seemed to me that the subject deserved.  In any event the Rebel Alliance, which was Peter and me, won the day by getting the Moff (I decline to use the surname James gave him) out of the asteroid belt and off the table.

I've just done some research on Wookiepedia and find that the Grand Moff (how can people say all this with a straight face?) in the original trilogy was played by well-known wargamer Peter Cushing. It's a small world; or a galaxy far, far away; one of the two.