I mentioned in a recent post that this is a time of year for tradition. The context when I wrote it was that I found myself, not for the first time, suffering a dental problem at a time of year when one can't get an appointment with a dentist. That has been swiftly followed by my central heating playing up at a time of year when one can't get hold of a plumber, again not without precedent. So, in order to try to keep warm by typing frantically I am going to revive the annual review of the year, which I couldn't be bothered to do last year. There has certainly been a little bit more to look back over this year, and thankfully quality was mostly high even where quantity was not. 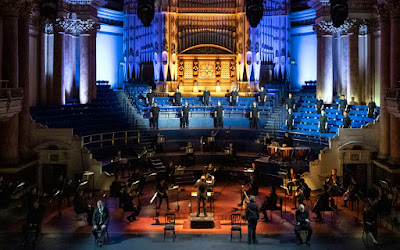 Opera: I saw nine, plus a ballet, and I'm going to give top spot to Opera North's socially distanced 'Fidelio', in large part because it was the first that I had seen for a long time and because it's about freedom. I must give an honourable mention to 'A Little Night Music' in the year that Sondheim died, plus Mahler's 2nd Symphony. I know that's not an opera, but it's my list.

Theatre: I only saw four plays, and the best was 'Wuthering Heights' by the Wise Children company. I note that I also rated them the best in 2019. This production is transferring to the National Theatre in February; you should go. Incidentally, had I bothered to give my views for 2020 the top spot would have been shared between 'Kneehigh's Ubu' and 'Pride and Prejudice* (*Sort of)'. The former starred the wonderful Katy Owen as Pere Ubu, and she also featured prominently in 'Wuthering Heights'; the latter is also just about to open in London's West End and, once gain, I would urge anyone within striking distance to go and see it.

Music: A paltry two gigs to choose from, and I'm going with Martin Simpson, again largely because it was the first in a long time for him as well as me. There might be more of that line of thought in these lists.

Film: A mere three films in the cinema, and the jury has decided to withhold the prize for this year. One of the three was the Bond film: what a load of old tosh, although I did rather enjoy the action sequence in the Italian village near the beginning.

Talks: Talks mainly moved online, and I moved with them. I saw twenty nine, only two of which were in person. The best I think was one on building ventilation given by a member of the government's SAGE advisory committee; I may live the rest of my life outdoors. On a less gloomy note, I very much enjoyed the Royal Armouries talk on 'The Life and Career of Captain William Dawson RN'. The worst talk by some way was 'The Jewellery of Downton Abbey'; what was I thinking?

Books: I read 118 books, it clearly being something that one can do without leaving home. Books of the year were: for fiction 'The Good Soldier Švejk'; and for non-fiction David Hepworth's '1971' about rock music's greatest year.

Boardgames: Apart from the expansion to 'Maquis' - where I'm sorry to say that the French Resistance is not prospering under my leadership - I have only played two-player games. Of those I played 14 different games 84 times. I think I might do a separate post about which of those I would recommend. The local boardgaming club has resumed weekly sessions, and I trust that at some point in 2022 circumstances will be such that I feel comfortable in joining them.

Wargames: I think there were ten wargames played or umpired, although this seems to be the one area where my compulsion to keep records doesn't apply. They were mainly Piquet and its variants except for one game of To the Strongest! and one of X-wing. I enjoyed them all but probably for me the siege games had the edge; possibly because the rules gave a much more enjoyable game for the defender than I thought they would when I read them. During lockdown I have built up a mighty pile of new, unplayed rules and would hope that: a) I can get one or more of them to table in 2022; and b) they work half as well as these did. It was good to see Mark back on a regular basis as well.

Event of the Year: I am very tempted by the time I saw armed police intervening in a queue jumping dispute in a branch of Greggs, which for some reason I neglected to post about at the time. However, really it has to be the first wargame after a hiatus of more than a year. Just because.

I wish you all love in a peaceful world.