Turning it up to eleven

“It was always cheaper to build a new 33-MegaLith circle than upgrade an old slow one.”

In my absence from the blog over the last week or so the shocks have kept coming in the the specific fields of politics and cricket: it turns out that the prime minister is a liar and that England aren't very good. However, it hasn't been any amazement which I may have felt that has prevented me from blogging; rather it has been the after-effects of upgrading my laptop to Windows 11. Much driver updating later, almost everything now seems to work. The exception is that I still can't transfer photos from my camera, which is unfortunate because there has been a game in the annexe. 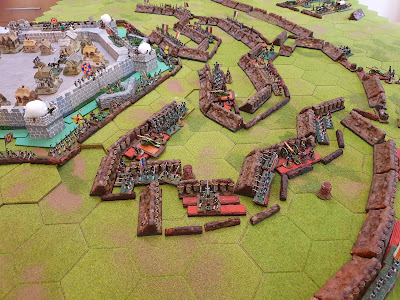 I have had, therefore, to resort to my phone to record the intricate trenches with which the besiegers have approached the fortress having learned from the mistakes of the first game. The scenario is basically the same, with only some minor tweaks to how the wall strengths are recorded. Once again it proved to be an enjoyable evening, and we shall resume next week with the bombardment proper. My rules for assaults got a run out when the attackers launched a brief sortie against the sappers in the foremost trench. Whilst I hadn't had that specific situation in mind when I wrote them, the process didn't fall over when put to the test; faint praise, but the most that I'm prepared to give.