The following newspaper clipping has come into my possession. Can I make it clear that I in no way condone the sentiments expressed, except of course that I like to see large numbers of toy soldiers on a table. 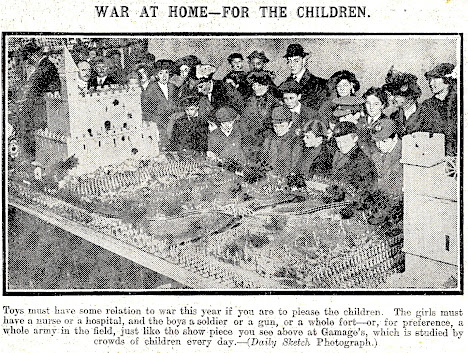 I believe that the year is 1915; I wonder if they were saying the same thing by Christmas 1918. It's also interesting to note the sexism which they've sneaked in among the warmongering. The Daily Sketch was absorbed into the Daily Mail half a century or so ago. It provided the downmarket bigotry which when added to the Mail's existing establishment right-wingery (they of course are the paper that supported both Hitler and Mosley) produced the current appalling publication.