James alternates a bit, when putting on games in the legendary wargames room, between made-up scenarios and historical refights. We have therefore replayed numerous battles from the Punic Wars, the Italian Wars, the Seven Years War and so on, none of which I had ever heard of before let alone knew anything about. Even when we got on to World War II we only ever fought Sidi Rezegh. However, now he has painted up a very large number of Napoleonic units I'm in with a shout. And so we are half way though Vimeiro, sort of. As you will know if you have read his blog he has given the French a chance by allowing all their attacks to go in at once. It doesn't seem to have done them any good, and nor has my knowledge done me any good, but I shall wait until we've finished the game to explain why. What I would say is that his mechanism for forcing the French to attack in the right locations if not at the right times is quite inspired. 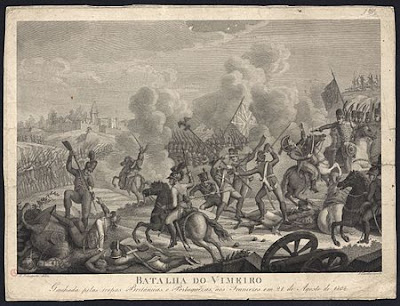 The big question was what changes he would have made to the rules, and he didn't disappoint. As a quick summary:

So, we resume again on Wednesday when I might take some photos. I shall have plenty of time because I anticipate my command not lasting more than the first half hour or so. In the meantime if any of you are in communication with James you can get on his good side by asking him which card allows you to carry out a small sapping task and whether it costs any initiative.
Posted by Epictetus at 16:55