There was consensus around a couple of issues following our siege games. One was to make the game a bit quicker by starting with more of the siege works already in place and the other was about how close together siege guns could be. As I think I've mentioned before, the rules are agnostic when it comes to terrain; you play with what you have. The way I did it originally was to cast the embrasure piece separately so it could simply be slotted into trench lines when required. It turned out to be one of those ideas that were better in theory than in practice. As well as leaving the guns a bit too far apart it was quite fiddly to place on the table. So I have decided to cast up some proper gun emplacements. 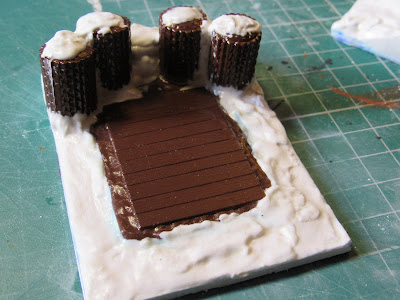 The trench sections are 10cm long, so my first thought was to make the emplacements 5cm. However that's not quite wide enough for the guns and crew. In addition, I used bits and pieces from the Italeri Battlefield Accessory Set when making the masters for the trenches and saps and wanted to do the same again for consistency. That decision led to 6cm being a more convenient width and so that's what I've gone with. 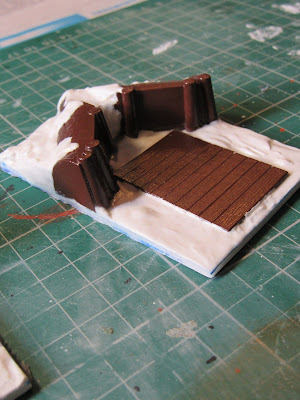 The only other materials used in the masters are foamboard and Polyfilla, all covered in a couple of coats of wood varnish. I have ordered both silicone, to make the moulds, and polyurethane, to cast up some models, and will crack on when it all arrives. I'm tempted to make a mortar position while I'm waiting.