It's been a while since wargaming featured here, but there has been a bit going on in the background. Mark and I had a run through of Friedland in the annexe using C&C, but came nowhere near finishing, which was a bit disconcerting as the ability to play a game in an evening has always been a big attraction to me. I don't think we were playing particularly slowly; just an effect of having lots of troops on the table perhaps. Before setting the game up I had a vague idea of the strategic significance of the battle, but couldn't have told you any of the tactical detail. Having read some background it reminded my why I started tweaking the victory conditions on official C&C scenarios. Historically the Russians were trying to evacuate across a river, but don't get any victory points for doing so, only for destroying enemy units. 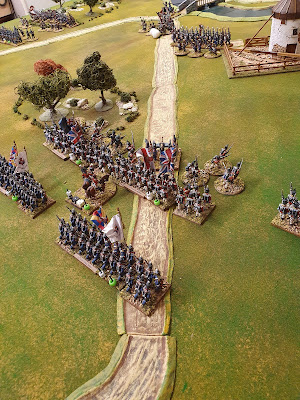 Speaking of rivers, the next game I played in was a couple of weeks later in the legendary wargames room of James 'Olicanalad' Roach was set in the Peninsula and featured a British attempt to deny a bridge to an advancing French force. You can just see the bridge at the top of the photo. The French collapsed rather quickly, and in the after game debrief there some tentative suggestions that the scenario would have been better if they had a bit more morale. When we met again the following week for another peninsula game James admitted that he'd cocked the calculation up and the French should have had twice as much morale; proving I suppose that sometimes one's instincts are correct.

The new game, which took place over the last couple of weeks, proved to be the best of the three, despite me as the French losing to a tag team of British commanders in Peter the first week and Mark the second. If I could summarise James's intention in developing a Piquet variant specific to the Peninsula, it isn't especially to recreate history. You will recall that, by and large, British lines always beat French columns. Instead it is to make an enjoyable game in which the French, using columns, can sometimes close with and overwhelm British lines, but will sometimes be repelled by firepower. The rules have a lot of moving parts which all need to gel together, but if I was going to pick one change which occurred over the time we have been working on them, and which appears to have helped, it would be the handling of skirmishers. When we started we kept trying to make skirmishers do what they did - or what we thought they did - historically. Where we have ended up is using them in an essentially abstract way to make it easier for troops that have them to move up to charge range. It all comes back to whether one is striving for a historical simulation or an enjoyable game.

Lastly, you are all no doubt wondering how I am getting on painting the packs of Peter Pig Mexican Revolution figures I bought some weeks ago. Well, in the way these things always work out, such limited painting as I have been doing has been of some Kennington Grenadiers à Cheval.