Yesterday's post ended with a reference to Catherine of Aragon and - is it planned? is it coincidence? - it was that queen, as portrayed by Bea Segura, who stole the show in 'Henry VIII' at the Globe a couple of weeks ago. In fact the Spanish actress was the only good thing about it, it being all too clear why no one ever puts on this collaboration between Shakespeare and John Fletcher. I'd certainly never seen it before and couldn't have told you anything about it beyond the fact that it was an accident with a cannon on the opening night that led to the burning down of the original Globe. This production gave a co-writing credit to Hannah Khalil who had been tasked with making it focussed more on the female characters. She did this by importing lines from other plays and poetry by Shakespeare and giving them to Catherine, Princess Mary and Ann Bullen (sic). I'm not entirely sure it worked, because hearing Mary speak lines which one knew really belonged to Lear just made me wish I was watching that play instead. Anyway, Segura was great as a woman determined not to be pushed aside for the convenience of others and it was good to be back in the Globe again after it had been forced to close by the plague. 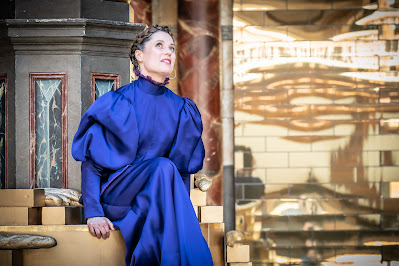 Much better was 'The Corn Is Green' at the National Theatre, although as it cost literally a dozen times as much to watch then so it should have been. This semi-autobiographical piece by Emlyn Williams about a poor child from a Welsh-speaking mining community being mentored by an inspirational teacher and eventually winning a scholarship to Oxford, was heart-warming without being sickly sweet. Even a stage full of miners, faces blacked with coal dust and singing hymns, seemed to work in context. Nicola Walker as Miss Moffat, overcoming the class and gender prejudices ranged against her, was excellent. The evening also provided something I'd never seen before when the backstage machinery to bring the set on for the second half malfunctioned, and so the actors simply performed with a third of the stage bare. The show must go on. 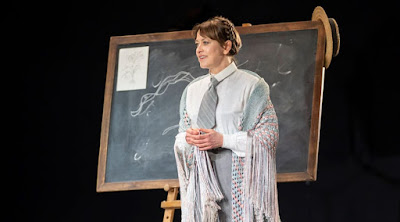 The third really good performance of a strong woman that I have seen recently was that of Bettrys Jones, as Ellen Wilkinson, in Caroline Bird's 'Red Ellen'. Wilkinson was the only female Labour MP elected in the October 1924 election, served in the wartime coalition government and was the second ever female cabinet member as Minister for Education under Attlee, before her untimely death in 1947. There's a lot to fit in, from the Jarrow March to the Spanish Civil War, and the staging if pacey, with lots of set and costume changes occurring before our eyes. A host of supporting characters are played by the small cast - including Einstein, Hemingway, Churchill and Herbert Morrison - but the focus is always on Ellen herself, who is never offstage. 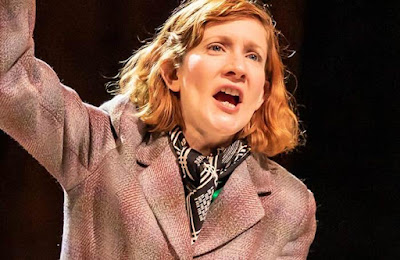