I find that I didn't say everything I wanted to yesterday. I think I was distracted by listening to Test Match Special and wondering if there was an alternative timeline in which England were any good. Jonathan Agnew reported that after the first day's play he had been asked by the ICC's anti-corruption team whether he thought there was anything suspicious about the loss of so many England wickets in such a short time. He had given the only possible answer: "Haven't you been watching for the last two years?".

Anyway, what I wanted to mention was that I don't mind alternative history fiction, because it's, you know, fiction. I'm not talking about about time-travelling fantasy where someone goes back to the middle ages with a machine gun, but simply a novel set somewhere sometime where things have turned out differently. Robert Harris's 'Fatherland' would an example probably known to many readers (*), and a Nazi victory in the Second World War has spawned many others. The only one of these currently on my to-read list is Philip K. Dick's 'The Man In The High Castle'. However, this blog's recommendation in the genre is 'The Alteration' by Kingsley Amis. 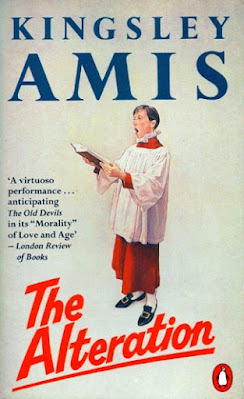 The two main alternative path taken in the book is no Protestant Reformation, and therefore no Enlightenment and so scientific progress has been slowed and restricted. The Roman Catholic church now dominates a totalitarian Europe through what is a cross between the Inquisition and the Gestapo. The novel is set in the 1970s and a number of people prominent in that decade pop up in different guises, as do many historical figures. There are many allusions to familiar cultural artefacts in this different context, but perhaps the one to highlight is an alternative history book within a book: 'The Man In The High Castle' by Philip K. Dick in which Henry VIII has had a son by Catherine of Aragon.

* If, of course, the blog had many readers in the first place.