And so to the opera. For some reason this blog has been neglecting its self-ordained role of bringing reviews of the most life-affirming of the arts to wargamers who don't give a toss. Half a dozen operas have passed without comment this year (plus this one which snuck in somehow), but Parsifal is going to get the treatment, not least because it lasted five hours. 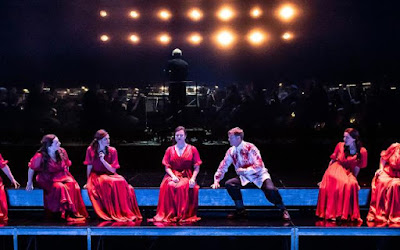 Musically, it was wonderful. Five hours seems a long time (*), but as with other Wagner operas that I have seen it actually goes very quickly, especially if one takes the sensible option of just surrendering to it without constantly trying to estimate when the the next interval is. Plus of course, taking the other sensible option of going to the toilet first. As with Ian McKellen's 'King Lear' I think one should say to oneself that if those on the stage can stick it out then so can I. 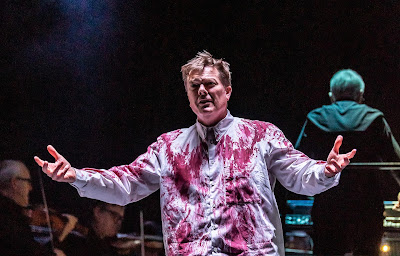 The semi-staged concert production was striking, with the orchestra - on top form - present on stage, but not able to be seen clearly because of a slightly opaque curtain between them and the singers and bright lights shining from the back. The singers were uniformly excellent, although I would pick out Katerina Karnéus as Kundry for special mention. Kundry, incidentally, undergoes almost as big a change between acts as Puccini's Mimi. 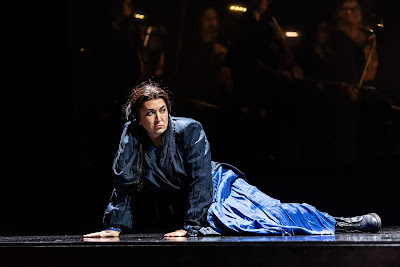 But what is it all about? Good question; buggered if I know. Superficially, it's about the Grail legend Parsifal being the German version of Percival. I have seen it suggested that Wagner had convinced himself that the word was related to the Parsees of India, which seems odd because they are Zoroastrians, and this is overtly Christian, albeit layered with even more mumbo-jumbo than normal. It could be about compassion, but the characters spend more time placing curses on each other than one would expect from truly compassionate people (**). It's possible that there is some connection being drawn between castration and celibacy - this is before Freud of course - or perhaps it's a commentary on the risks men run from women who may emasculate them, Kundry again; she really is the most interesting character involved.
The programme went to great lengths to say that if one didn't know that Wagner was anti-semitic then one couldn't deuce it from the libretto. Maybe not, but equally one can see why in later decades sinister types would seize on operas about groups of uniformed Aryans with unresolved homoerotic tensions whose destiny can only be fulfilled on the arrival of a charismatic leader.

* Probably because it is

** In particular the question of who had originally placed the curse on Kundry confused me enormously. If anyone knows, please leave it in the comments.