We played the 'Test of Resolve' 1st St Albans scenario featuring all the wrong nobles (*) and the rules met with a fair degree of approval. We were able to get a completely unbiased opinion as there was neither winner nor loser. Henry VI unfortunately got caught in the crossfire and perished. In the words of the victory conditions: "If he dies the game ends immediately and inconclusively as a draw! The Wars of the Roses take a surprising turn". 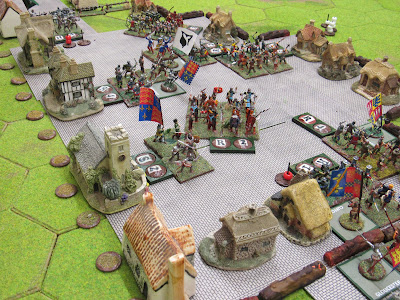 My main concern prior to playing a full game was whether the special period specific rules together with the game's initiative system would result in things running on rails, leaving no interesting decisions to the players. I'm pleased to say that didn't happen, although 1st St Albans is not a particularly normal battle, so perhaps no firm conclusions can be drawn. A concern that did arise came through the use of D12s, which inevitably means that luck in combat and morale testing can swing quite a bit. Still, I think we shall have another go, with a battle in the open rather than in a town next time.

The scenario itself was fine. I previously observed that one of the roads along which the Yorkists attacked is actually quite steep, but in truth had they been penalised for that they would surely have never fought their way into the town. The one area I would probably change is the 'God Save the King Test' which had to be taken by the first Yorkist units into the square. This was a straight die roll, but I think I would give them the normal bonuses for quality, attached commander etc. If the first unit fails then perhaps I would give a down to the subsequent units to reflect this. In terms of the way I laid it out, I would next time specifically mark out the areas around the square notionally occupied by houses, as well as scattering a few buildings about for aesthetic effect.

* There have been questions about how I come to have a WotR collection which doesn't include a Warwick figure; he was after all fairly prominent at the time. Well the good news is that I have found him. I definitely don't have either York or Salisbury though.