All the right nobles...

... but not necessarily at the right battles.

I decided that one sensible way to rouse myself from my wargaming inactivity was to take a look at some of the sets of rules which I have accumulated over the last couple of years. Even more logical is to start with a period for which I actually have the figures, so the Wars of the Roses it is. I have a couple of unplayed sets, but first up is 'Test of Resolve', a card based WotR specific set which I briefly described on in a previous post. They should be straightforward for me to pick up because they are derived from/an homage to/a blatant rip-off of Piquet Inc's FOB albeit in a very streamlined and simplified fashion. I like the look of the initiative allocation system, which doesn't seem that it will result in me calling on the higher mathematics in order to prove that it's no good, and I'm also rather taken with the way they have evolved the Heroic and Lull cards. However all that is just from reading and having a play about with the mechanisms. What is required is a proper game. 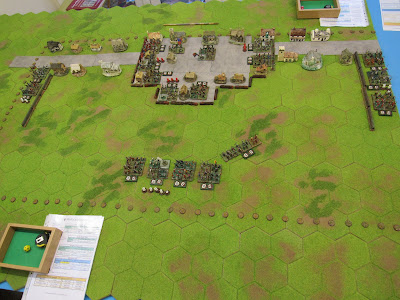 When I bought the rules I also bought the scenario book for the first part of the wars (the book for the second half is also now available and an order has been placed), and so from that I have chosen 1st St Albans. The scenario book is really very impressive and could, I think, be easily translated to other rules. In the same way that no one really knows how they fought at the time, there is often also uncertainty about where they fought and what happened. Whilst this ought to be less of an issue for 1st St Albans, the road layout of the centre of the city not having particularly changed since then, there are still alternative views of what occurred. In this case the authors have gone for the Yorkist left and right swinging round and charging along Holywell Hill and St Peter's Street. This leads to my one small quibble. As the name implies Holywell Hill has a slope, quite a big one actually. I was in St Albans a few months ago visiting my sister - I stayed at the White Hart which is approximately where the middle house is on this side of the road in the photo above - and I can confirm that climbing up it carrying a suitcase is bad enough; one assumes it would be worse while wearing armour. None of this gets a mention in the scenario. Anyway, be that as it may, I'm going to play it as written.

Or at least I'm going to play it as written except for one detail. Notwithstanding having said in the first paragraph that I have the figures, I don't have models of all the requisite commanders. Therefore the Yorkist attack will be led by the next generation, those who fought at Tewkesbury to be precise. The Lancastrians will mostly be present and correct - I even have a Henry VI kneeling in prayer - but Sir Andrew Trollope has kindly agreed to deputise for Buckingham.

Email ThisBlogThis!Share to TwitterShare to FacebookShare to Pinterest
Labels: Piquet, St Albans, Test of Resolve, Wars of the Roses