A couple of months ago I posted photos of the forces laid out for the final assault in the siege game that has been clogging up the table in the annexe since the middle of last year. I have actually played it out, I just haven't written it up. The reason for that was that it became obvious fairly quickly that it was impossible for the attackers to succeed using the combination of the rules as written, the forces as chosen and the tactics which I was employing. 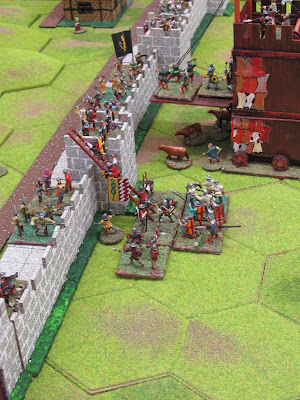 A small part of the problem was that the defenders had won every one of the preliminary siege rounds, forcing the besiegers to attack before they had built all the siege equipment they otherwise might have and without the level of superiority of forces they would have wished for. Possibly also I had jinxed them a bit by writing in that last post: "I don't see how the attackers can lose". However the main problem is that assault by escalade is exceedingly difficult. Now, obviously it should be, but then again one wants a balanced game. I came away with a number of thoughts as to how to tweak things, for example I think more, but smaller, defending units might work better. The attackers also need to concentrate their efforts to gain local superiority. I had held off posting about it pending trying those out, but have decided to move on and do something else completely.

So, overall I thought the rules, which you will recall were published about a year ago in Miniature Wargames, were an interesting way to represent a medieval siege. They could also provide a platform to build on to include some of the aspects which Vauban's Wars introduced effectively e.g. food, spies, disease. The part that didn't work for me was the assault, but funnily enough that's the bit that isn't handled well by VW either.