To the surprise of absolutely no one, the next battle in our trial of 'Test of Resolve' will be Tewkesbury; indeed the only reason it wasn't the first one was that I didn't own the relevant scenario book at the time. I got into the habit of playing Tewkesbury with new rule sets because it is, in my opinion anyway, the battle from the Wars of the Roses which is most balanced and in which the inevitable treachery, subterfuge, delayed arrivals, ambushes etc are still present, but don't overwhelm things. Plus of course there is now the added attraction of being able to compare one author's scenario with another's. 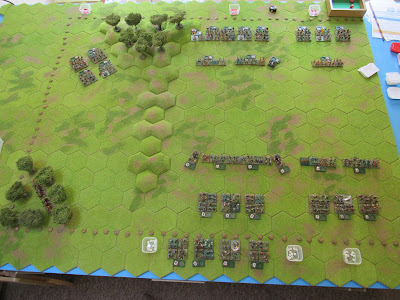 Once again I am playing it as written, and will report back. My first thoughts are that I might have had Wenlock and Devon on higher ground than the approaching Yorkists, but I don't suppose it will matter much. 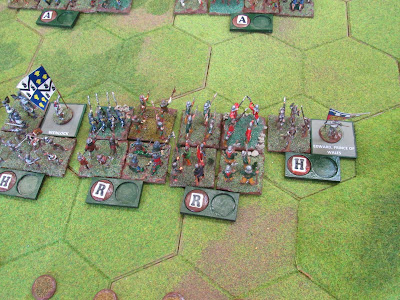 This time it is Edward, Prince of Wales whose demise would signal the end of the game. Can he survive for longer than his father did in our refight of 1st St Albans? We shall see.

I'm trying a different method of recording casualties and morale this time round. I originally made my markers for Command & Colours and, as I have no intention of making any more, am struggling a bit to find the best way of fitting a square peg in a round hole.

Email ThisBlogThis!Share to TwitterShare to FacebookShare to Pinterest
Labels: C&C, St Albans, Test of Resolve, Wars of the Roses