I claimed in a reply to a comment on a recent post that I had scratchbuilt all my warwagons. It didn't ring true when I typed it and a quick check in the annexe showed that indeed the one on the right in the photograph is a long out of production resin kit from Polish manufacturer Valdemar. It's a small point, but nevertheless I have been suffering the agenbite of inwit and wished to set the record straight.

The weather is still too nice to bother playing through the currently set up scenario, but I have chewed over it a bit more while sitting in the garden catching some rays. The problem with the period - as it is with many that are favoured by wargamers; I'm not at all sure why that should be - is that one side appears to have won all the battles despite eventually losing the war. To make a game of it, one has to handicap them a bit whilst still getting the balance right. War wagons are of course essentially defensive so there is also the need to to make things about more than simply waves of attacks by one side on the other, with the only issue to be resolved being whether it turns out to be Rorke's Drift or the Alamo.
Apart from the warwagons my Hussite and Imperial armies are generic 15th century forces who more often see service in the Wars of the Roses and occasionally take on the Ottomans. I have previously posted about my habit of buying any new release of figures that looks suitable (and by the way the figures mentioned in that post are still untouched in their box, exactly as you would expect) and have done it again. The Burgundian Crossbowmen haven't yet been featured on Plastic Soldier Review so let me get in first and say that they are, er, mixed. In fairness the figure (there are four identical sprues of eight figures) winding a stirrup crossbow is pretty good as are the pavises provided. The three crossbowmen firing are less promising. They actually look like someone launching one of those balsa models of a Spitfire powered by an elastic band (*) that I used to pester my dad to buy me on seaside holidays in the sixties. 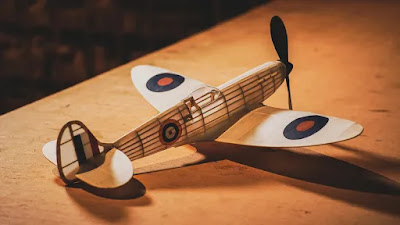 Had that been what the sculptor was aiming for I would have said job well done; as it is... The other four figures are firing gunpowder weapons. It's not what it says on the box, but fair enough. For the record I don't really need any more crossbowmen, handgunners or indeed pavises, so the mix supplied is neither here nor there. On the other hand the fact that the weapons being carried wouldn't look out of place in a 20th century conflict is somewhat more annoying. They certainly bear little resemblance to anything one of Charles the Bold's men would have used.

In other news James tells me that 'Jump or Burn' will shortly feature in the legendary wargames room once again. This is a cracking multiplayer WWI air combat game written by James himself and published by Piquet Inc. He long ago sold his original collection of planes, but some recent technical developments in the method of mounting models for the table - the details of which were somewhat obscured by the amount of prosecco he had drunk before he explained them to me - has caused him to paint some more. The rule book is notoriously badly edited, but is well worth persevering with.

Boardgaming has been rare over the last couple of months because I have variously been unable to see or unable to think. The best game I played and have previously recommended, was Medieval. A more straightforward Eurogame but also worth looking out for is Castell, which has the unlikely theme of building Catalan human towers.