Back in the 1970s it was possible to be viewed as a sex symbol despite sporting a haircut that was very much of its time and which would be considered a bit ridiculous today. But enough about me, you want to hear about Suzi Quatro. 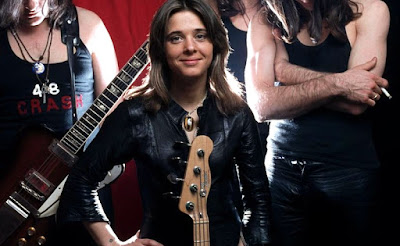 I have been to see her speak at the Bradford Literature Festival, and she was as delightful as you would expect. I mentioned the other day that I am fond of hearing stories of first hand encounters with old bluesmen and I find that the same is also true of rock stars from the decade that fashion forgot; who of my age wouldn't want to hear about Phil Lynott's mum's guest house? Speaking of my contemporaries, a word of warning to you: apparently Ms Quatro has tired of middle aged men sharing reminiscences about her looking down on them from their bedroom walls - one can see her point. 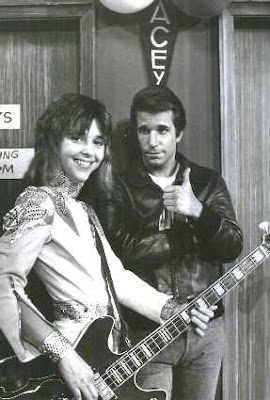 The only singing was an impromptu snatch of "Subterranean Homesick Blues" when asked to name her favourite songwriter; rather it was an evening of reminiscences and reading of extracts from her books followed by questions from the audience. In spite of living in the UK for the best part of half a century she has retained enough of her Detroit upbringing to be completely confused by some of the Yorkshire accents thrown at her. In her defence, one question did include the most peculiar pronunciation of the phrase "Mama's Boy" that I've ever heard. There were about two hundred people there in the sweltering heat - she apologised for not wearing leathers and blamed the temperature - and to my surprise at least it was about half and half men and women. The concept of female empowerment featured strongly in remarks from the floor.

I didn't stay to buy a book and get it signed, but I was intrigued enough to think that I might try to pick up a cheap remaindered copy of her autobiography in due course; praise indeed.
Posted by Epictetus at 10:38