Go back to your oar, Forty-One

Five or so years ago, before the galleys were put away, I think we had agreed that grids were the way to go, not least because it avoids all debate about who can ram/board/rake what and when. When the galleys once again emerged from the display cabinet last week, we picked it up where we left it: hex grids with chips occupying two hexes, principally I think because ships are longer than they are wide. Whilst last week's game was fun, there was I think a consensus that it wasn't quite right. If you look carefully at the picture below you can see that one change made was that ships are now back in one hex. 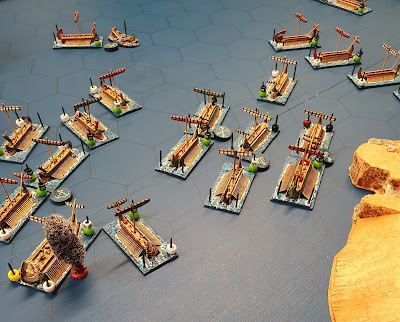 The big difference that makes is to make turning easier, not so much for the models, but rather for the players trying to figure out how to get stuff from A to B. The whole thing was, to quote Peter, "slicker" and I'd go along with that. There were other changes, pretty much all of which seemed to work, and the traditional post-game discussion came up with potential solutions to the few that didn't. This is the type of game that needs to be played to a conclusion quickly. Grids help, the 'slicker' turning and moving help a bit more, and what would really top it off is if the ships sank or surrendered a bit sooner.

The initiative rules have ended up as somewhat of a hybrid between classic Piquet and its derivative, FoB. It includes, I think by chance, the latter's mechanism for potentially interrupting one side's long runs of initiative by a short burst of activity from the other side. I seem to remember that we've tried that combination before, and I was reminded last night of its merits. For what it's worth I vote for all 'Dress the Lines' to become 'Lulls'. While on that subject, the deck for 'Fleet of Battle' - that's what the rules are called - contains one card whose name is frankly impossible to pronounce, to the extent that I mentally think of it as the 'She Sells Seashells' card. I need some help from this chap: