I had been thinking for a while that one way of regaining my blogging mojo would be to revisit favourite themes from the past. The opportunity to do so was handed to me on a plate earlier today, when I returned home after my morning constitutional to find my spare bedroom on fire. The failure of smoke detectors to detect, well, smoke has featured here before in consideration of smouldering chariots, exploding laptop chargers and a number of others. However, damage was minimal and given that the whole episode would appear to be my fault, it's probably best to move swiftly on. Instead, I shall be looking to exploit the distinction of being the only wargames blog which reviews operas. 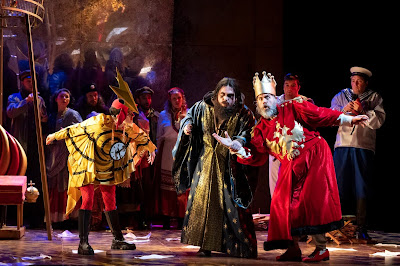 The plans of opera companies are fixed years in advance, and so it is entirely a coincidence that English Touring Opera are presenting Rimsky-Korsakov's 'The Golden Cockerel' at this time. The work is a satire on incompetence in war and on political corruption, first written in response to the debacle of the Russo-Japanese war and the resultant unrest in the streets, which Lenin referred to as 'the great dress rehearsal'. This could have been a 'cometh the hour, cometh the touring opera company' moment, in which art once again reflects and challenges real life. It isn't, and it doesn't, mainly because a focus on knock-about slapstick completely undermines any bite the anti-war message might have had. It is "all mirth and no matter", as Beatrice said. The director is also let down by a truly dreadful English translation of the libretto, whose sub-Gilbertian doggerel must have been really dated back the forties or fifties or whenever it was done. The original was based on a poem by Pushkin, who has presumably been turning in his grave for decades at the insult. 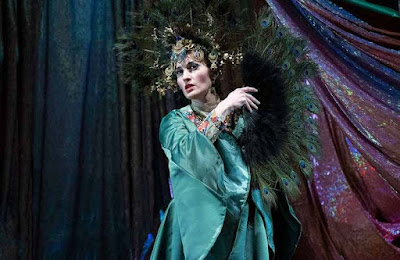 Sadly, despite having a fairy tale at its heart it just never managed to become magical. Having said all that, the music was good, as were the performances, especially Paula Sides as the Queen of Shemakha and Alys Mererdid Roberts as the eponymous fowl. The design placed it in the pre- Great War court of Nicolas and Alexandra, complete with Tsarevitch (two actually) and Rasputin-like astrologer. The striking design on the curtain in place between acts was apparently inspired by the Rayonists, themselves active in Moscow and St Petersburg during that period. "What can you tell us about the Rayonists?" you ask, and "Not much." I reply. According to Wikipedia they could be considered to be Cubo-Futurists, so I suggest that's how you think of them. It also rather tantalising says that in 1913 they started to paint their faces and published a manifesto entitled "Why We Paint Our Faces". What it fails to include is any reference to the contents of said publication, which is sad because, who knows, if their argument had been convincing enough I may have reached for the maquillage myself.