Maggots In My Scrotum

And so to the theatre. I have been to see 'The Book of Mormon', and laughed continuously from beginning to end. It's hilarious. 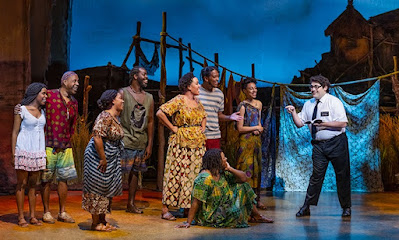 Is it also offensive? Oh yes, at least if you are the sort of person who is offended by songs about AIDS, paedophilia and female circumcision, all done with lots of swearing. But even if you're not then some of this stuff is so outrageous that no description by me will do it justice; it really needs to be seen to be believed. One review I saw said it was brilliantly conceived and superbly executed, and I would go along with that: 5 stars for sure.
The other question you will be asking: is it rude about the Mormons? Not particularly I would say. Individually they are portrayed as nice, well-meaning people and the tenets of their faith are laid out - admittedly in song and dance - for the audience to make up their own mind about. I shan't be giving it all a great deal of thought - Occam's Razor suggests there was an obvious reason why Joseph Smith refused to ever show anyone else the golden plates - despite the leaflet pressed into my hand by the Mormon missionaries waiting outside the theatre afterwards. But they were really nice and smiley, not like the angry evangelicals who picketed 'Jerry Springer: The Opera' when I saw that many years ago.
One final point, I only learned from research after seeing the show that there really was an African warlord called General Butt Naked.
Posted by Epictetus at 12:12