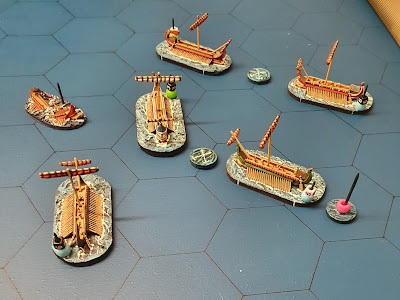 Mine are the three ships marked with a 6. The one on the left has rammed and sunk the wreck; the one in the centre has rammed its target to no effect, has lost its ram (that's the pink bead) and is entangled; the one on the right tried to rake its target, failed and is entangled. Believe it or not, this was the absolute high point for the Carthaginians. No sooner had our other squadrons of ships entered the fight than they were either boarded or rammed, or occasionally both. The rules? Well, they possibly need some work.

Having opened the book on Edward the Exile mentioned yesterday, I have inevitably been reading it. I'd forgotten how full it was of all sorts of interesting digressions - such as how the son of the Doge of Venice came to be King of Hungary - but it also has some sections which seem strangely relevant to the zeitgiest. For example:

"The democratic Kievan period upon which the Russians now look back with nostalgic yearning began with the coming of the Viking Varangians in the ninth century and ended in the holocaust of the Mongol invasion in the middle of the thirteenth century. Kiev's leading role was taken over by Moscow whose princes borrowed the tools of statecraft from the tyrannical Mongol system."