Oh, it all makes work for the working man to do.

I have been asked why my review of Klute in yesterday's post was so peremptory. Why, people say (possibly rhetorically, who knows?), didn't I bang on about how Bree Daniel's seeming journey of self-discovery only actually reinforces the patriarchy that was doing her down in the first place? Well the simple answer is that, just as I was getting into my critical flow, the plumber unexpectedly arrived. Sadly Flanders and Swann don't mention plumbers, but that's no reason not to listen to this classic.

I have been to see last season's Globe production of 'Comedy of Errors' on the big screen; actually not that big a screen because Otley Courthouse was designed by the Victorians for dispensing justice rather than setting up makeshift cinemas. I have always found this a very funny play, which is not something which one can say about all of Shakespeare's comedies. It's farce pure and simple and doesn't rely on the sort of clever wordplay which would have had the Elizabethans rolling around, but leaves us scrabbling for the footnotes to the script. I have mentioned here before my theory that a good farce requires the appearance of sardines. I may have to extend that to seafood in general, because the director in this case decided that an octopus was the way to go. 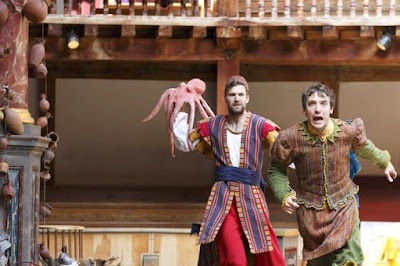 In any event it was very good and quite up to the standard of Julius Caesar and Antony and Cleopatra which I saw in situ this time last year.
Posted by Epictetus at 12:10