As well as being behind in reporting boardgames played, I have been remiss in recording my experiments with asparagus. Therefore let me present sweetcorn, sweet pepper and bacon. 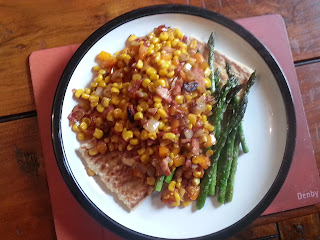 Jonathan 'Palouse' Freitag has asked me to justify my assertion that it's harder to get the tactics right in grid based games (as an aside, his blog is well worth a read, with some quite lyrical non-wargaming posts; although those of us living in the 21st century might be puzzled by measurements expressed in feet and degrees Fahrenheit), but I'm not entirely sure that I can. My view is based on the fact that James, Peter and I struggled somewhat at first with C&C and appear to be doing the same with TtS!. Inasmuch as I have a theory, it is that grid based games afford far fewer options, because movement is in discrete  chunks and there are typically fewer range bands. In a traditional game some infantry may be able to move say 20% further than others in a turn; in a grid based game they all move the same or one type can move twice as far. The same goes for differences between weapon ranges. Game designers therefore seek to represent the smaller differences that can no longer be built in to movement distances and ranges by other unit specific mechanisms. It's the use of these rule nuances that I mean when I say tactics.

And here is a photograph of a large Dalek making its way along Kirkgate. There is no panic among the townspeople. 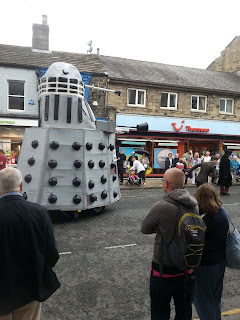 Email ThisBlogThis!Share to TwitterShare to FacebookShare to Pinterest
Labels: asparagus, C&C, Daleks, To the Strongest!