So, we had a third game of To The Strongest!, and once again discovered that we hadn't been playing it properly before. Basically it seems to be a well thought through, internally consistent set of rules hidden within a somewhat disjointed and oddly laid out document. Every time we think that something doesn't quite seem quite right as it plays out on the tabletop we dive into the text and discover that it doesn't feel correct because it isn't correct. So far the problems seem to be on our part rather than the rules.

Of course one not only has to learn the rules, but also the tactics that the designer had in mind. This seems to be especially true in grid based games (that's a personal opinion, I have no empirical evidence that I could point to). I'm not sure that we are there yet and it took us quite a while with C&C. The first games of To The Strongest! were Punic Wars and this one moved us on to Early Imperial Romans against Celts. With hindsight the best tactics for the latter are hit and run rather than trying to slug it out, with even the ordinary auxiliaries saving on a six. Things weren't helped by the forces being created by using all the Romans that I had and then just adding more warbands to the Britons until the points matched. I also overdid the veterans on both sides, which possibly accounted for the stalemate that ensued along much of the table, and massed the barbarian cavalry rather than spreading them out as disruptive skirmishers. For the record the Romans won in the end. 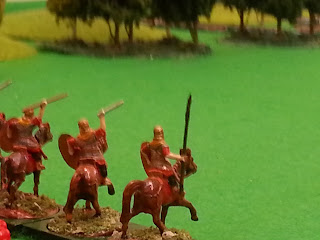 So, they are definitely good fun, but a final decision on them has to be postponed until we're clear that we're playing the rules properly with at least vaguely optimal tactics. Next up for this period is to buy some more chariots I think. Next up for the rules is to give them a go next week with my Wars of the Roses figures.
Posted by Epictetus at 10:06