And yonder all before us lie

I have set up a Romans vs Ancient Britons game to have a crack at Basic Impetus. I would like to have taken some decent photographs, but sadly it would seem that my camera is unlikely ever to return. (One which subject, anyone who found it following the Otley Show should understand that all those photos of the ladies tug-of-war were taken in admiration of their athletic prowess and for no other reason) We must therefore make do with some blurry efforts taken on my phone. 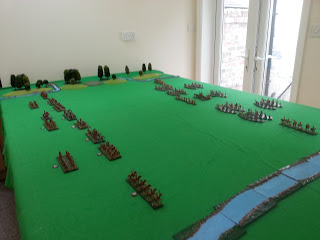 The terrain on either side of the battlefield is for aesthetic effect. In particular the river at this end is solely for the purpose of creating a space for the umpire to put his ginger beer and the rules. 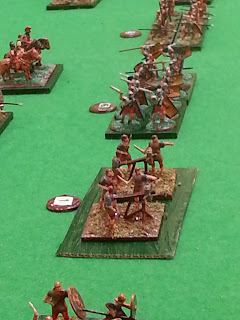 Roman ballistae on a precision, laser-cut template which only looks like a bit of cardboard painted green because of the limitations of the photography.

Some Airfix chariots, painted many, many years ago and never before seen on the table-top. Note once again the deceptively cheap looking unit footprint template. 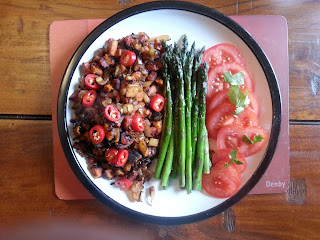 I intend to have a solo run through at some point over the next few days while listening to the ODIs vs New Zealand. In the meantime here is some asparagus with a hash of sweet potato and chorizo.
Posted by Epictetus at 14:47