We feed the baby

And so to the theatre. The Royal Exchange in Manchester and the West Yorkshire Playhouse have co-produced a dramatisation of Tolstoy's novel Anna Karenina. As with the Keira Knightley film of 2012 - which I liked; it had a Tom Stoppard screenplay after all - it is a stylised rather than naturalistic staging. In the case of the climax (although I'm assuming everyone knows how it ends, I won't spell it out) not reproducing the written word is of course inevitable given the physical limitations of a theatre, but it seemed to me that the director's choice would have left anyone coming to the story cold completely mystified as to what was supposed to have happened. 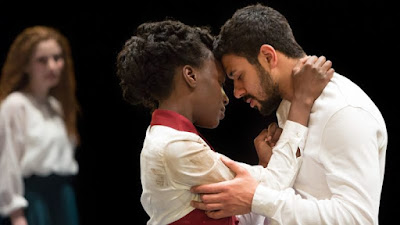 Anyway, whilst the book has a very famous opening sentence (not present here) and a well-known ending, the meat of the sandwich is, er, well sort of in the middle. Anna trades safety for passion, her husband becomes a Christian and thereby loses the ability to forgive, Vronsky finds that one should be careful what one wishes for, Oblonsky - representing his entire class - sleepwalks towards his doom, and Levin and Kitty learn that true heroism is in the banal daily struggle rather than the grand gesture. All of these themes were sketched out here rather than covered in depth and therein lies the paradox of condensing such a complex novel into a two hour play. In order to understand it one must have some familiarity with the source, but if one does then the precis version can easily disappoint.