And so to the theatre. I missed 'Beryl' at the West Yorkshire Playhouse during it's first run last year - timed to coincide with the Tour de France - and came within a whisker of missing it again on its revival this year, but just managed to get a ticket for the penultimate performance. As an aside I somehow ended up with a discounted senior citizen ticket. Upon picking it up I tried to pay the extra, but the box office clearly thought I was fantasising about my lost youth and wouldn't take the money. 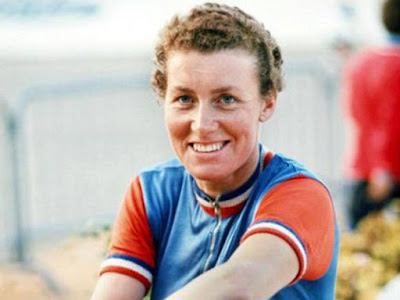 The play itself is simply wonderful. Given the relative lack of media coverage that Burton got during her life (although I for one had actually heard of her prior to the play being mounted) there was a lot of exposition, but it never dragged or became too much. The four person cast moved as effortlessly through the moods as our heroine moved through the gears; humour was ever-present, but so was a recognition of the impacts on others of her driven personality.  The staging was extremely well done as was the physical theatre. There was a round of applause only ten minutes in for one effect which marked her marriage. The fourth wall was broken a number of times, mostly scripted but also on one occasion to allow a member of the sell out audience to display his knowledge of the main crop produced in the triangle between Wakefield, Morley and Rothwell. Anyway, I am not ashamed to say that I left the theatre with a tear in my eye.
Posted by Epictetus at 22:04