James has come up with what seems to be another excellent Seven Years War scenario. Details and photographs are as usual on his blog (although you'll search in vain for a report on the conclusion to the previous Crusades game) so I'll just highlight a couple of points. I'm in charge of the Russians and my first failure was in drawing for morale. My draw was so low that I thought James was joking when he told me the minimum below which I could declare a Mulligan; some serious fiddling had to take place to ensure that we could make a game of it. My second problem has been an inability to get any reinforcements on. My force is split into a higher number of commands and this is therefore a bigger problem to me than it would be to the Prussians if they had it, which they don't.

On the plus side, I got lots of initiative, with runs of 20, 19 and 18 (in that order funnily enough) although looking at the current position you'd never know it as the Prussians have done most of the attacking. And whilst James rubbishes the Cossacks as 'fairly useless' they've actually done rather well. They have destroyed a handily placed Prussian artillery battery and provided a screen that has delayed the Prussian cavalry sufficiently to enable an infantry command to move in force onto the hill on my right flank. 'Fairly useful' I would say.

Anyway, in case there should be any visitors to the blog who are not interested in wargaming, I offer the following cautionary illustration. One shouldn't mess with goats. 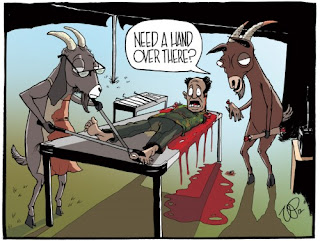