This blog is about nothing if it's not about cooking, and so I am proud to present your bloggist's lemon and courgette cake. 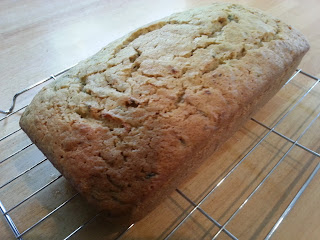 However, the blog is also about nothing if it's not about listing boardgames that I have played and in which no one else is interested. So here goes for July:

7 Wonders: I like this, especially the fact that it's scalable without slowing things down, but I don't play it often enough to be any good at it.

Abyss: The pasted on theme has something to do with mythical beings living under the sea. It was OK, but of games of this type I'd rather play Elysium.

Chinatown: An area control game involving an auction, a sort of bingo mechanic and inter-player trading. It left me a bit cold.

Dark Moon: A much more sophisticated version of The Resistance, minus the keeping your eyes closed bit. We played with seven and it was good fun. That is the second game was fun, because the bad guys won the first one in about five minutes. I especially liked the opting in and out of each task depending on one's view of who else was going to do what. That's not the clearest of descriptions, but I suggest that you play it find out what I mean.

Francis Drake: Didn't have much to do with Drake specifically, but was about piracy, trading and biffing the Spanish so one can see their point. I was dubious about the two stage turn process when we started, but it grew on me. The chap who didn't seem to understand the rules won fairly easily, which may or may not prove something.

Good Cop Bad Cop: Another hidden identity game, with the added complexity that one's identity can change due to circumstances outside one's control leaving one losing to the strategy that one had oneself devised the moment before. A bit random, but one does get to shoot people with guns, which - as I think I mentioned last month - aren't real.

Hanabi: We played with a neophyte who, understandably enough, almost imploded with the responsibility of remembering what someone had told him thirty seconds before. We still managed to score seventeen.

Machi Koro: A real estate themed engine builder game. I really enjoyed it despite falling so far behind after a couple of turns that I had no realistic chance of getting anywhere. Only time will tell whether this was just my incompetence or a major design flaw that no one else has spotted.

New Salem: No, no, no, no, no! A hidden identity game that goes immediately onto my list of games that have nothing whatever to do with the theme or title.

Pentago: A sort of sexed up Connect Four. I suck the big one at spatial awareness games.

Pillars of the Earth: Cathedral building worker placement game. I liked it when I played it before and enjoyed it second time around. It's accounting, so I won.

Quartermaster General: After a bit of a gap, I played this three times in July and I find it still to be an absolutely cracking game. With experienced players one can, if the cards fall right, play through the second world war in forty five minutes and enjoy oneself enormously in the process. Every game works out differently; indeed in the last one I played the Italians largely won the thing single handed, capturing both the UK and India along the way. They were helped by an odd allied strategy which saw the UK and US abandon Europe and Russia in order to gang up on - and not defeat - Japan. I can't recommend this enough.

Spyfall: A hidden location game by way of a change. It turns out that I also suck the big one at games requiring creativity under time pressure.

Tinners' Trail: A strongly themed game about Cornish tin mining which I really enjoyed and would happily play again. The concept of the water ingress is very good and I liked the fact that there is never enough money to invest. It's accounting, so I won.