And so to the opera. Leeds Town Hall is sold out and rammed, it's the hottest day for years, and we're facing two and half hours straight through Wagner's The Flying Dutchman with no interval. But, fortified by a last gasp pint of Tetley's I made it somehow. So, thankfully, did the singers, conductor and orchestra. 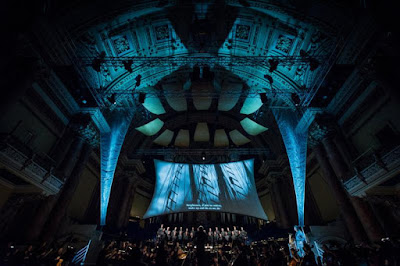 It was, as one would expect, simply excellent. The cinematic semi-staging works even better for this than for the Ring and the title character's costume wouldn't have looked out of place in a fully staged version - or in a Disney cartoon come to that. I did wonder why the Helmsman had come dressed like Phil Harding from Time Team, but the influence of television is everywhere these days. Anyway, the chorus and band - the foundation of Opera North's success - were on fire.

As usual with opera one is faced with the question of what on earth it's about. I lean to a theme of Marxist alienation. Die Hollander himself represents wage slaves in the twenty first century, doomed to be tossed about by the storms of the capitalist crisis, unable to find a safe harbour but still naively believing that security, stability and a home can be his one day. Is it a coincidence that he sings 'Die Frist ist um' at the same time as the Germans say exactly that to the Greeks?
Posted by Epictetus at 21:02