And at last ends the age of cant

Politics, which was meant to have been driven out by culture in this blog, has obviously loosened the catch on its Browning, because it's back. Two short pieces worth reading about Jezza's victory are here and, er, in the new edition of Private Eye which you'll either have to pay for or read for free in W.H. Smith. If the latter, and you need to find it quickly before the staff spot what you're up to, then it's the first item in the HP Sauce column on page 11.


I have been to London once more (it rained) and, yet again, Virgin maintained their 100% record for cancelled and delayed trains, plus sneaking in an extra 'socket with no power' just to pour salt in the wounds. I arrived home in the middle of the night via Derby. 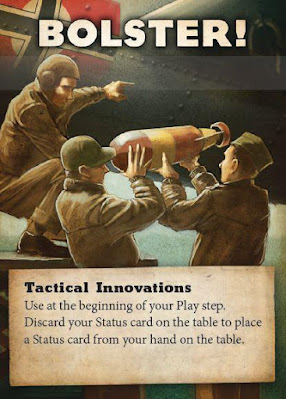 For some reason I have got into the habit of recording boardgames played monthly in arrears. I would like to break that, but time doesn't permit me to do it now. Can I therefore just say that I have now had a chance to try the Air Marshall expansion to Quartermaster General and damn fine it is too. However, my opinion should be viewed with a slight reservation because despite playing twice I never used either of the two newly introduced mechanics. These are unsurprisingly air forces plus Bolster cards, which are essentially Response cards played directly from the hand. But observing others using them and listening to their comments convinced me that the expansion improves an already excellent game. For the record I won once as the Soviet Union (where I did nothing except keep building armies in the Ukraine while the US saved the world) and lost once as Japan (where I captured China, India, Australia and the Middle East and still ended up on the losing side; God only knows what the Germans and Italians were up to).

Now, this is an anthem: