Really, I was meant to be a ballet dancer

Writing about boardgame themes reminds me that I have once again let a backlog of games played to build up. Apologies for any repetition from previous reviews.

Abluxxen: Good game, as abstract as they come and proud of it.

Boss Monster: A dungeon building card game that to my surprise I quite enjoyed. Boardgamegeek suggests that the theme isn't so much dungeons and monsters as early videogames, this being simply a cardgame version. 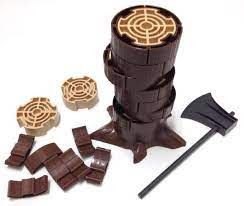 Click Clack Lumberjack: I love this game; it's a real guilty pleasure. One can't question the theme of a game where one chops down plastic trees with a little plastic axe; well I can't anyway.

Game of Thrones: I really can't speak to the accuracy of this as I have never read the books nor seen any of the television series. We played the A Feast for Crows expansion, which those teaching the game said was the only way to make it playable. The mechanics were clear and made sense, but - driven by the theme presumably - it's asymmetrical. I find it hard to believe that Lannister won't always win.

Hau La: I have a soft spot for three dimensional games (see Click Clack Lumberjack above) and this one is refreshingly based on building up, rather than knocking down. I liked it, but wasn't clear of its replayability. It would be interesting to try with two players to see how it differed from the four player game.

Indigo: My reaction when this came out of the box was that it was like a hexagonal version of Tsuro, and so it is. But it's a lot better, with deeper strategy and more player interaction. I'd happily play this again.

Istanbul: I have mentioned before that I like this game - which has nothing much to do with Istanbul specifically; the setting could be any vaguely Eastern Mediterranean town - but I am beginning to wonder if the best strategy to follow isn't also the dullest and most obvious. I hope not.

La Granja: A new game with an interesting card play mechanism. Every card has four different ways that it could be used, all of which are very powerful, but as it can only be played once many difficult choices arise. I was left rather confused as to which was the best strategy to follow from all those available; those who have played it more often tell me that there doesn't appear to be one. For the record I went for a maximum pig strategy, but didn't win. Good game.

Last Will: A heavily themed game, but not a theme that would have occurred to many people before playing it, unless perhaps they were big Richard Pryor fans. An interesting game, with the turn order/ action scope bidding mechanism working rather well. I was robbed.

Legendary:Villains: A co-operative deck building game doesn't seem the most likely game to tickle my fancy and when the theme is comic book superheroes and villains it's probably even less plausible. However, I was enjoying myself, until we were embarrassingly quickly trounced by Captain America, the Incredible Hulk and, worst of all, Ant-Man. Ant-Man! What kind of villain gets beaten by someone whose superpower is shrinking to the size of an ant?

Letters From Whitechapel: This was the first time I'd played the game where Jack wasn't caught early on; indeed he won. Unfortunately the main effect of this was to make the game outstay its welcome, admittedly not helped by an extended break spent looking for a missing piece which it turned out never existed in the first place. I'm not sure what could be done to improve things, which is a shame because when it works, it works well.

Marrakech: A really fun game, although remarkably simple. You need to play the optional rules because the family friendly ones are just bland and boring. This is a reasonably strongly themed game about selling rugs (NB rugs not carpets) including a large number of the playing pieces actually being rugs, but I don't think that I'd actually try selling them this way

Murano: A rule of thumb would be that among every group of people being taught this game, one will have been to Murano. On this occasion it was me. It is with a modest amount of authority that I can therefore say that the theme is completely pasted on and those wishing to learn the finer points of glass manufacture should look elsewhere. It is however a very good game, with the rondel type mechanism causing many intriguing decision points.

New Salem: Here, as I've possibly mentioned before, we come to one of that class of games whose game play isn't so much unrelated to the ostensible theme, but actually pretty much directly the opposite (see Kanban and Evolution for example). Surely the whole point about the Salem witch trials is that there weren't ever any witches? For the record it's another hidden identity game coupled with a bit of drafting and set building. The chap who won neither understood the rules nor grasped the fact of his victory until it was pointed out to him. I think that tells you everything that you need to know.

One Night Ultimate Werewolf: Which I still don't like. Does the theme make sense? Consider the phrase "Insomniacs, wake up." and then tell me.

Paperback: As someone else has already written, this is Scrabble but fun. It's a well designed deck building word game with lots of card selection choices as well as the challenge of spelling. There is a very thin journalistic theme pasted on top, but that still doesn't explain the name. It's a good game.

Splendor: I've owned this for some time, but for one reason or another hadn't got round to getting it on to the table. It's a very good game, almost entirely abstract, well worth playing and also noteworthy for the very high quality of the components

Sushi Go!: I'm warming to this. My pudding strategy was better than when I'd played it previously.

Spyfall: Yet another hidden identity game, but this one involves a free form question and answer mechanism that is as big a recipe for dullness (and stress) as it sounds. Everyone is dealt a card that tells them which location they are all in except for one player who simply gets a card identifying them as the spy. Through questions about their location the spy attempts to identify where they all are while the others attempt to identify the interloper. Why would anyone hire a spy who can't easily spot whether he's on a space ship or the First Crusade?

Viceroy: A tableau building game, where the cards are illustrated with what seem to be completely irrelevant Conan the Barbarian style pictures, but which is otherwise simply a colour matching and set building game. It was OK, but didn't grab me.
Posted by Epictetus at 11:18