And so to the theatre. Opera North are putting on 'Kiss Me, Kate' thereby allowing me to continue my autumn of Shakespeare at one remove.

At least according to Cole Porter; I couldn't possibly comment. It's not the sort of show I'd have gone to see were it not being put on by Opera North, but I thoroughly enjoyed it nonetheless; especially, and to my surprise, the dancing. The company are well known for occasionally updating lyrics to include topical references, but I think the pig's head that appears at one point was probably in the design before the emergence of swinegate (as it surely ought to be known). 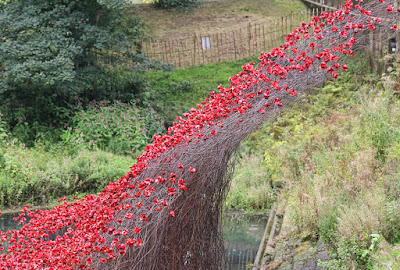 In other news I have been to the Yorkshire Sculpture Park to see the Wave of Poppies, which is rather lovely. It originally formed part of the core at the Tower of London around which was added one ceramic poppy for each of the fallen. It suits its current setting very well and I can understand why it has proved so popular an attraction. YSP's permanent exhibition includes the work of Sophie Ryder, and one of her very large hares also currently stands outside Cartwright Hall, the City of Bradford's art gallery. 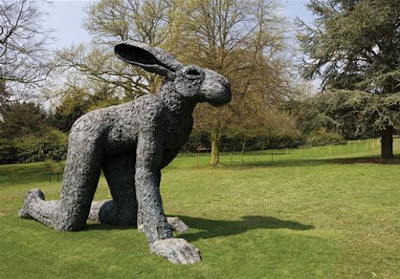 And, as it happens, I have also been there, accompanied by the elder Miss Epictetus. One of the current temporary displays is the Bradford Open, an exhibition of local artists. My daughter and I were in agreement with the judges and, even more oddly, each other. I particularly liked the enormous painting of Zeus on multi-layered reclaimed cardboard. The permanent collection is fairly wide ranging, moving from the sort of high Victorian bourgeois stuff endowed by nineteenth century wool barons through to Lowery, Lichtenstein and Warhol. And then there is Hockney, as always in Bradford, including my own favourite Le Plongeur. You will recall that Tory and Liberal Councillors recently tried to sell all of the above mentioned works of art plus many others, on the basis that only rich people should have access to art.

The philanthropic founders of the collection - Tories and Liberals to a man - must be turning in their graves.
Posted by Epictetus at 16:35