And so to the theatre. It is obvious from the comments on my previous post that my readers are a bunch of philistines. Having said that, General Fwa's desire for one of the Trammps' stage suits is understandable, indeed commendable. The subject of dressing up for wargaming has been discussed here before, but going the full disco would be a significant and brave departure. It would, I suggest, work best in multiplayer games where moves, dice rolls etc would be made simultaneously in a choreographed routine by all those on one side of the table, involving a mix of twirls, shuffling feet and syncopated handclaps. This is gold; I haven't been so excited by an idea since the time it was suggested that all competition wargamers wore mankinis. 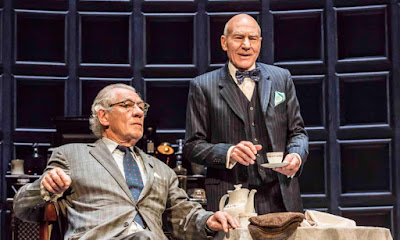 The relevance of the newly revealed philistinism of you, dear readers, is that I shan't be able to ask you to explain the meaning of Pinter's 'No Man's Land', which I went to see last night. I thoroughly enjoyed it, but must admit that I have bugger all idea what it was about. Memory perhaps? Aging? Marital infidelity? My accompanist for the evening suggested it was about the inscrutability of women, but I suspect that she was merely trying to appear deep and meaningful herself, and in any case there aren't any women in it. Instead, there are four male actors and the words Hampstead Heath and cottage appear a lot, so I'm going to stick my neck out and say there's a gay subtext that I didn't understand any more than I did the rest of it.

I saw the live broadcast  of the production that has been touring the UK before ending up at Wyndham's Theatre on Charing Cross Road, and which features both Sir Ian McKellen and Sir Patrick Stewart. The brief recorded interview with the two shows Picard to be somewhat more of a luvvy than Gandalf, which accords with the views of my ex-wife ( who seems to have suddenly started making a lot of appearances in this blog for no particular reason) who got boomed at by him at a reception when he was Chancellor of the University of Huddersfield. As actors however, I'd give McKellen the edge. One lengthy monologue by Stewart in the second act was completely upstaged by the silent MacKellen simply sitting and reacting; an episode that I think proved again the benefit of watching the cinema version, with its cutting between closeups of actors. Kudos must also go to Owen Teale who made the line "We're out of bread" so full of menace that I was unnerved despite being 200 miles or so away.